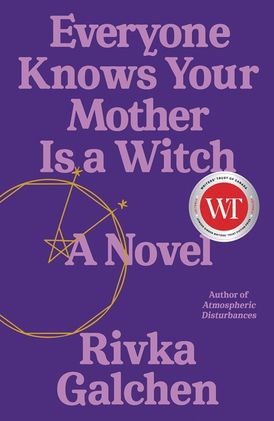 MacEwan University Book of the Year

It is 1618 in the German duchy of Württemberg. Plague is spreading, the Thirty Years’ War has begun, and fear and suspicion are in the air throughout the Holy Roman Empire. In the small town of Leonberg, Katharina Kepler, an illiterate widow, is accused of being a witch.

Katharina is known for her herbal remedies and the success of her children. Her eldest, Johannes, is the Imperial Mathematician and the renowned author of the laws of planetary motion. It’s enough to make anyone envious, and Katharina has done herself no favours by going out and about and being in everyone’s business.

So when the deranged and insipid Ursula Reinbold (or as Katharina calls her, the Werewolf) accuses Katharina of making her ill by offering her a bitter, witchy drink, Katharina is in trouble. Her scientist son must turn his attention from the music of the spheres to the job of defending his mother. Facing the threat of financial ruin, torture and even execution, Katharina tells her side of the story to her friend and neighbour Simon, a reclusive widower imperiled by his own secrets.

Drawing on real historical documents but infused with the intensity of imagination, sly humour and intellectual fire for which Rivka Galchen is known, Everyone Knows Your Mother Is a Witch will both provoke and entertain. The story of how a community becomes implicated in collective aggression and hysterical fear is a tale for our time. Galchen’s bold new novel touchingly illuminates a family and a society undone by superstition, the state and the mortal convulsions of history.

“Funny in parts, absurd in others, drawing on actual history, this riveting novel takes us into the labyrinthine hearts of accused and accusers alike.” — Margaret Atwood

“Mesmerizing details abound, such as the torture inflicted on those accused of witchcraft, and the herbal remedies Katharina relies upon. Galchen portrays her characters as complicated and full of wit as they face down the cruelties dealt to them. . . . This is a resounding delight.” — Publishers Weekly (starred review)

“Galchen’s story will, by necessity, remind many readers of Arthur Miller’s The Crucible, but by focusing her narrative on an old woman rather than a cast of attractive young girls, she’s made her mission a far sneakier one. Then, too, Galchen’s prose can sparkle and sting with wit. . . .There is so much in this novel to consider—the degree to which we make monsters of one another, the way that old age can make of femininity an apparently terrifying, otherworldly thing—but it is also, at every step along the way, an entirely delicious book. Dazzling in its humor, intelligence, and the richness of its created world.” — Kirkus Reviews (starred review)

“Galchen's novel is exuberant — funny and urgent and full of a singular energy. Though based on a true story, it beautifully demonstrates Galchen's limber imagination and ability to find narrative harmony in the chaos of our world.”  — Refinery 29

“[D]elightfully funny. . . .Galchen has written another smart book that investigates the power of narrative, both good and bad, foregrounding a woman who’d only been a footnote to a famous man’s story, all while being funny and deceptively easy to read. It’s quite a magic trick.”  — Los Angeles Times

“The comedy that runs through ‘Everyone Knows’ is a magical brew of absurdity and brutality. Galchen has a Kafkaesque sense of the way the exercise of authority inflates egos and twists logic. . . [Everyone Knows Your Mother Is a Witch is] no witchcraft-craze parody.”  — Washington Post

“Though it's chronologically remote, in the story of Katarina Kepler one can reflect on contemporary issues that include feminism, social class, ageism and the ways in which people demonize those who don't conform to society's norms, while at the same time pondering the alien atmosphere of a world drenched in religious fervor and a pervasive belief in the supernatural. There's nothing diabolical about it, but Everyone Knows Your Mother Is a Witch is a consistently entertaining novel that casts its own memorable spell.”  — Shelf Awareness

“This book suits our time of towering duplicity and uncomfortable truth. . . . One of Galchen’s great accomplishments is making us see, through Katharina’s boldness, how illusory and unstable our concept of “society” is, and how ultimately, looking upwards, at the stars, away from the earth, as her son famously did, is a pursuit more likely to have truth at its end.”  — Boston Globe

"Little is known about the real-life Katharina, but her fictional counterpart . . . . sparkles in this prickly and often black-humoured story." — Maclean's

"Rivka Galchen’s fiercely intelligent novel Everyone Knows Your Mother is a Witch chronicles a seventeenth-century accusation of witchcraft, but speaks with urgency to our world today. Katharina Kepler, the illiterate widow at the heart of the book – and mother to the famous mathematician – is wry, caustic, and wickedly funny as she dictates her defense. Risking torture, social ruin, and death, Katharina must navigate the perilousness of living in a world that denies her basic human rights. Here is a powerful indictment of misogyny, gossip, and the casual cruelty of crowds. Galchen’s novel shines with empathy and understanding, using the past to dissect and examine one of the essential crises of our time: the conflict between science and superstition, between what is true and what everyone believes to be true." — Jury citation for the Atwood Gibson Writers' Trust Prize