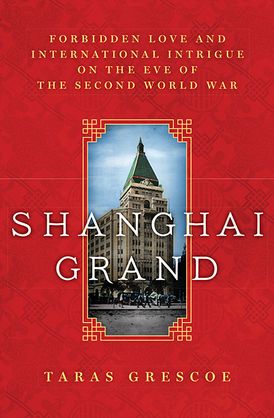 Finalist for the 2016 Mavis Gallant Prize for Non-Fiction

On the eve of the Second World War, the foreign-controlled port of Shanghai was the rendezvous for the 20th century’s most outlandish adventurers, all under the watchful eye of the fabulously wealthy Sir Victor Sassoon. Emily Hahn was a legendary New Yorker writer who would cover China for nearly fifty years, and play an integral part in opening Asia up to the West. But at the height of the Depression, “Mickey” Hahn had just arrived in Shanghai nursing a broken heart after a disappointing affair with an alcoholic Hollywood screenwriter, convinced she would never love again. After entering Sassoon’s glamorous Cathay Hotel, Hahn is absorbed into the social swirl of the expats drawn to pre-war China, among them Ernest Hemingway, Martha Gellhorn, Harold Acton and the colourful gangster named Morris “Two-Gun” Cohen, who had once lived in Saskatoon and Edmonton and later retired to Montreal. When she meets Zau Sinmay, a Chinese poet from an illustrious family, she discovers the real Shanghai through his eyes: the city of rich colonials, triple agents, opium-smokers, displaced Chinese peasants and increasingly desperate White Russian and Jewish refugees - a place her innate curiosity will lead her to discover first-hand. But danger lurks on the horizon and Mickey barely makes it out alive as the brutal Japanese occupation destroys the seductive world of pre-war Shanghai and Mao Tse-tung’s Communists come to power in China.

Taras Grescoe, with his trademark style and verve, brings this rich history to life in all its beautiful and intimate detail.

“Grescoe does a remarkable job of structuring his material, shifting his gaze across a broad canvas with grace.” - The Globe and Mail

“Grescoe uses these sources--and those of the many other writers, journalists, memoirists and diarists of the time--to capture the rollicking spirit of Shanghai on the verge of history, sorting through their biases and feuds to provide richly detailed anecdotes . . . a fascinating record of a lost time.” - National Post

“A love song to 1930s Shanghai. Taras Grescoe has fallen hard for the ‘the wicked old Paris of the Orient,’ its barrooms thick with gangsters and newsmen . . . Shanghai Grand is a headlong swoon for old Shanghai. The feeling is easy to catch.” - New York Times

“Grescoe draws on archival sources rarely touched by other historians, and his treatment of his subjects is balanced and empathetic. . . . Time diminishes even the grandest monuments, and we are fortunate when a talented storyteller takes the trouble to reconstruct them in such meticulous and compelling detail.” - Literary Review of Canada

“There is a considerable escapist pleasure to be found in [Grescoe’s] evocations of the memorable mix of con men, capitalists, revolutionaries, ruffians and romantics encountered by [Mickey] Hahn during her Shanghai sojourn.” - Wall Street Journal

“Here’s the Mandarin for ooh-la-la! As Taras Grescoe, a respected Canadian writer of nonfiction, shows in this marvellous, microscopically descriptive history . . . Shanghai in the 1930s was internationally notorious as ‘the wicked old Paris of the Orient.’” - The Spectator (UK)

“Grescoe’s narrative is a keenly observant, sometimes soulful portrait of Emily “Mickey” Hahn, an American writer who lived in Shanghai from 1935 to 1943, and of China’s political and social realities during that tumultuous period in its history. . . . This is a wonderful book.” - Publishers Weekly

“[A] lively biography of a city and some of its colorful inhabitants. . . . Grescoe exuberantly captures the glamour and intrigue of a lost world.” - Kirkus Reviews

“The fascinating historical accounts collected from archival records and old correspondence provide a feeling of biography mixed with historical fiction, although the facts are solid. Through this blended approach, Grescoe’s work will appeal to readers with a historical sweet tooth.” - Library Journal

“Grescoe interweaves a cast of intriguing international characters into this seductive biography of a time, a place, a poet, and a girl.” - Booklist

“Superbly written, this well-researched history brings into focus the dissolute hedonism, intrigue, and out-there craziness of a world on the brink of extinction. A faithful record of a life lived in momentous times.” - Qantas Magazine

“A doomed world of glamour and decadence, a clash of cultures, a cast of larger-than-life characters--Shanghai Grand has it all. A riveting tale of lost innocence and lost love. Prepare to be transported to another place and time.” - Dean Jobb, author of Empire of Deception

“Once upon a time, long before the city seemed custom-built to impress and intimidate, Shanghai was most notable for its people--a remarkable mix of refugees and adventurers, poets and fabulists, natives and outsiders. In Shanghai Grand, Taras Grescoe captures this lost world in all its richness.” - Peter Hessler, author of Oracle Bones

“A spellbinding work that immerses us in a disappeared yet irresistible world. . . . Grescoe’s deft weaving of the intimate, the historic, and the political offers another perspective on the reality of Shanghai and China today.” - Jury citation, British Columbia's National Non-Fiction Award

TARAS GRESCOE is the author of six books, including the bestselling Bottomfeeder, which won the Writers’ Trust Prize for Non-Fiction, the Mavis Gallant Prize for Non-Fiction and the International Association of Culinary Professionals’ Award for Literary Food Writing, and was shortlisted for the William Saroyan International Prize for Writing. His books Sacré Blues, The End of Elsewhere and Straphanger were also Writers’ Trust Prize finalists. He lives in Montreal.Visit him online at www.tarasgrescoe.com or on Facebook, or follow him on Twitter @grescoe.

Other Works by Taras Grescoe