How the Scots and the Irish Created a Canadian Nation 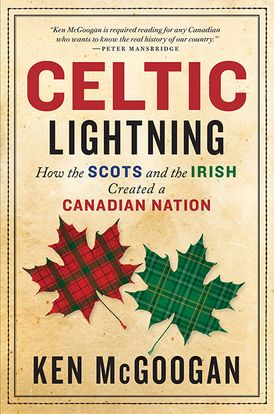 How the Scots and the Irish Created a Canadian Nation

With Celtic Lightning, bestselling author Ken McGoogan plunges into the perpetual debate about Canadian roots and identity: Who do we think we are? He argues that Canadians have never investigated the demographic reality that informs this book—the fact that more than nine million Canadians claim Scottish or Irish heritage. Did the ancestors of more than one quarter of our population arrive without cultural baggage? No history, no values, no vision? Impossible.

McGoogan writes that, to understand who we are and where we are going, Canadians must look to cultural genealogy. He builds on the work of Richard Dawkins, who contends that ideas and values (“memes”) can be transmitted from one generation to another. Scottish and Irish immigrants arrived in Canada with values they had learned from their forebears. And they did so early enough, and in sufficient numbers, to shape an emerging Canadian nation.

McGoogan highlights five of the values they imported as foundational: independence, audacity, democracy, pluralism and perseverance. He shows that these values are thriving in contemporary Canada, and traces their evolution through the lives of thirty prominent individuals—heroes, rebels, poets, inventors, pirate queens—who played formative roles in the histories of Scotland and Ireland. Two charged traditions came together and gave rise to a Canadian nation. That is when Celtic lightning struck.