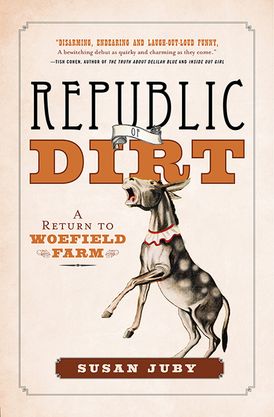 Prudence Burns is an overly idealistic Brooklyn girl who has inherited a derelict plot of land named Woefield Farm. Her motley crew of farm hands consists of Earl, an elderly, reclusive bluegrass legend; Seth, an agoraphobic heavy-metal blogger in early recovery from alcoholism; and Sara, an 11-year-old girl with a flock of elite show poultry.

When Prudence is felled by a thyroid condition, things on the farm begin to fall apart, resulting in valiant and sometimes ill-advised attempts to restore domestic bliss. Efforts are complicated by a renegade mule, attempts to turn a hideously ugly child’s playhouse into a high-yield roadside farm stand, and an electrical station’s worth of crossed wires. Will Prudence get well? Will Seth finally get rid of his pesky virginity? Will Earl rescue Sara? And will anyone, ever, admit they might be wrong?

Told in four highly distinct, unforgettably hilarious, and sometimes heartbreaking voices, Republic of Dirt is about what happens when passions collide with pride and what it takes to save each other, our small part of the planet, and ourselves.

SUSAN JUBY is the author of the critically acclaimed Getting the Girl and Another Kind of Cowboy, as well as the bestselling Alice series (Alice, I Think; Miss Smithers; Alice MacLeod, Realist at Last) and her latest novel for adults, The Woefield Poultry Collective. After dropping out of fashion college and attaining a BA from the University of British Columbia, Susan went to work in the book industry. She holds a master’s degree in publishing. She currently lives on Vancouver Island with her husband, James, and their dog, who prefers to remain anonymous. Visit her online at susanjuby.com.

Other Works by Susan Juby

Another Kind Of Cowboy