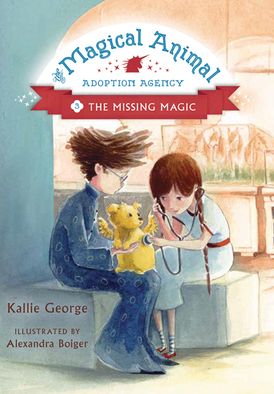 What is happening to the animals at the Magical Animal Adoption Agency?

A new volunteer has joined the Magical Animal Adoption Agency, and Clover’s not too happy about it! Oliver Von Hoof is supposed to be an expert on magical animals, but he’s barely older than Clover. How can he be an expert on anything? He’s certainly not very good at caring for the animals, so why does Mr. Jams keep asking him to help?

When Mr. Jams is called away from the Agency on a secret mission, Clover and Oliver are left in charge. It’s their job to keep the animals happy, but something strange is going on. Picnic the invisible puppy is turning visible, and Clover’s green cat, Dipity, is losing his colour. All of the Agency’s amazing creatures are becoming ordinary! And even Oliver’s magic wands aren’t enough to cure them. Will Clover and Oliver learn to work together before it’s too late?

Alexandra Boiger’s delightful illustrations shine in the third book of Kallie George’s The Magical Animal Adoption Agency series, where an open heart can best the nastiest of spells.

Kallie George is an author, editor, and creative writing teacher. She has written numerous books for children, including the Magical Animal Adoption Agency series, the Heartwood Hotel series, Wings of Olympus, Duck, Duck, Dinosaur, and The Lost Gift. Kallie lives in BC, on the Sunshine Coast, with her husband and son. Visit Kallie online at www.kalliegeorge.com.

Other Works by Kallie George

Alexandra Boiger grew up in Munich, Germany. She has illustrated many picture and chapter books, including five popular books about ballerina Tallulah and She Persisted by Chelsea Clinton. She lives in Northern California. Visit her online at alexandraboiger.com and on Instagram @Alexandra_Boiger.

Other Works by Alexandra Boiger

Duck, Duck, Dinosaur and the Noise at Night