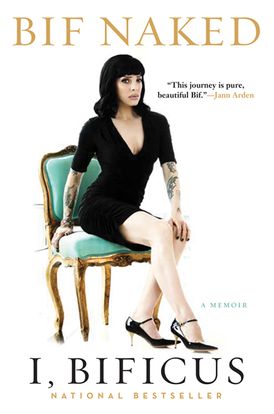 From one of Canada’s most original musical artists comes a bestselling new memoir about life, love, loss and triumph

Bif Naked was born in secret to a teenager living in India, the product of the relationship between a Canadian girl and a British boy. She was rejected by both families and hidden away in a mental hospital until being adopted by missionaries and moved to North America. She then began what she recalls with ironic humour as a “charmed life.” Targeted by girl gangs and facing other abusive situations, she escaped this early life by joining a punk rock band and leaving on tour, where she married the drummer and hit a downward spiral that found her on the floor of a Vancouver drug den.

Through it all, her creative personality and unstoppable humour were her weapons of self-defence. Bif showcased her life’s journey in tattoo ink across her body, and with her unique ability to transform her personal stories into song lyrics. She found her voice as a solo artist, started her own record company and at twenty-three years of age became an international recording artist. Throughout her remarkable career, armed with her singular talent and instantly identifiable look, Bif would captivate the imagination of audiences and media alike, releasing nine albums and twenty-one videos. She embarked on seemingly endless international tours, several feature films and multiple television roles, only to be struck with breast cancer at age thirty-seven. In facing that challenge, Bif would discover her passion for advocacy, as a triumphant survivor and someone who helps others first. This is Bif Naked’s story so far…

“From her secret birth in India to her upbringing in Canada, Naked gives a no-holds barred account of her tumultuous life and career.” — Vancouver Sun

“Spirited and sincere.” — The Georgia Straight

“Raw, honest, and frank about everything from her experiences of sexual assault to breast cancer, I, Bificus is also tender and surprisingly funny in places, telling the story of a determined woman’s struggle to carve out a place for herself in a male-dominated industry.” — Quill & Quire

“One would expect a memoir by Canada’s Queen of punk to be more about heavy days of partying than facing breast cancer or embracing yoga, but Bif Naked defies the stereotypes in her new memoir.” — Metro Winnipeg

“I can say without question that Bif Naked is one of the most brilliant, interesting, delicate, determined souls on the planet. Her journey is one that is at times unbelievable, but most great journeys are. This journey is pure, beautiful Bif.” — Jann Arden

“From rock bottom to rock princess, Bif Naked graduated from the school of hard knocks and punk rock by turning her life 180 degrees. Her book would inspire anyone to turn their life around with a bang.” — Nazanin Afshin-Jam-MacKay

“Nietzsche got it right when he said that what doesn’t kill you makes you stronger. Bif is living proof. After all she has endured she maintains integrity and a sense of humour. Her story is inspiring, to say the least.” — Sam Feldman, founder of A&F Music and The Feldman Agency

Other Works by Bif Naked