The Extraordinary and Tumultuous Life of Svetlana Alliluyeva 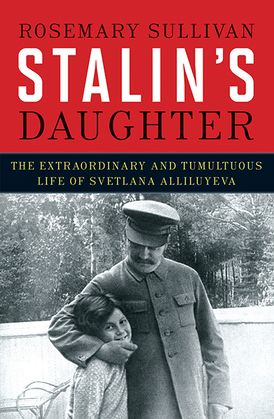 The Extraordinary and Tumultuous Life of Svetlana Alliluyeva

Selected for Kirkus' Best Nonfiction of 2015

Selected for the Boston Globe's Best Books of 2015

Stalin's Daughter is a work of narrative non-fiction on a grand scale, combining popular history and biography to tell the incredible story of a woman fated to live her life in the shadow of one of history's most monstrous dictators.

Svetlana Stalina, who died on November 22, 2011, at the age of eighty-five, was the only daughter and the last surviving child of Josef Stalin. Beyond Stalina's controversial defection to the US in a cloak-and-dagger escape via India in 1967, her journey from life as the beloved daughter of a fierce autocrat to death in small-town Wisconsin is an astonishing saga.

Publicly she was the young darling of her people; privately she was controlled by a tyrannical father who dictated her every move, even sentencing a man she loved to ten years' hard labour in Siberia. Svetlana burned her passport soon after her arrival in New York City and renounced both her father and the USSR. She married four times and had three children. Her last husband was William Wesley Peters, architect Frank Lloyd Wright's chief apprentice, with whom she lived at Taliesin West, Wright's desert compound in Arizona. In 1984, she returned to the Soviet Union, this time renouncing the US, and then reappeared in America two years later, claiming she had been manipulated by her homeland. She spoke four languages and was politically shrewd, even warning in the late '90s of the consequences of the rise to power of former KGB officer Vladimir Putin. A woman shaped and torn apart by her father's legacy, Svetlana Stalina spent her final years as a nomad, shuttling between England, France and the US.

In her research for Stalin's Daughter, Rosemary Sullivan had the full co-operation of Svetlana's American daughter, Olga. Rosemary interviewed dozens of people who knew Svetlana, including family and friends in Moscow and the CIA agent who was in charge of moving her from India when she defected. She also drew on family letters and on KGB, CIA, FBI, NARA and British Foreign Office files.

Stalin’s Daughter is a captivating tale of intrigue, tragedy and survival. - Maclean's

Insightful and thoroughly researched. . . . This excellent and engrossing biography is suitable for anyone interested in Russian history or in Svetlana’s struggle to make a difference in a world that never could separate her from her father. - Library Journal

Sullivan draws on previously secret documents and interviews with Svetlana’s American daughter, her friends, and the CIA ‘handler’ who escorted her to the U.S. for riveting accounts of her complicated life. - Booklist (starred review)

Sullivan tells a nuanced story that, while invariably sympathetic, nonetheless allows readers the freedom of their own interpretations. The complex and tragic figure that emerges offers an extraordinary glimpse into one of the grimmest chapters of the past century. - New York Times Book Review

ROSEMARY SULLIVAN, the author of fifteen books, is best known for her recent biography Stalin's Daughter. Published in twenty-three countries, it won the Biographers International Organization Plutarch Award and was a finalist for the PEN /Bograd Weld Award for Biography and the National Books Critics Circle Award. Her book Villa Air-Bel was awarded the Canadian Society for Yad Vashem Award in Holocaust History. She is a professor emeritus at the University of Toronto and has lectured in Canada, the U.S., Europe, India, and Latin America.