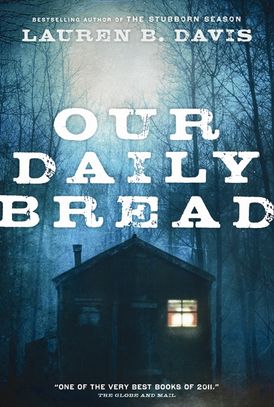 A novel about what happens when we view our neighbours as "The Other" and the transformative power of unlikely friendships; Our Daily Bread is inspired by the true story of the Goler Clan of Nova Scotia.

The God-fearing people of Gideon shun the Erskine Clan, who have lived on North Mountain in poverty, secrecy and isolation, believing their neighbours to be beyond salvation. "That's the mountain," they say. "What do you expect from those people?"

Yet in both groups nearly everyone has secrets and nothing is as it seems.

In town, young Ivy Evans is relentlessly bullied by her classmates. Though her father, Tom, is a well-liked local, his troubled marriage to a restless outsider is a source of gossip. As rumors and innuendo about the Evans family spread, Ivy seeks refuge in Dorothy Carlisle, an independent-minded widow who runs a local antique store.

When Albert ventures down the mountain and seizes on the Evanses' family crisis as an opportunity to befriend Ivy's vulnerable teenage brother, Bobby, he sets in motion a chain of events that changes everything.