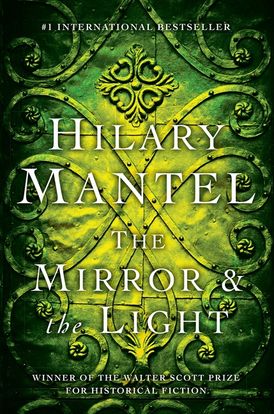 WINNER OF THE WALTER SCOTT PRIZE FOR HISTORICAL FICTION

“If you cannot speak truth at a beheading, when can you speak it?”

Cromwell is a man with only his wits to rely on; he has no great family to back him, no private army. Despite rebellion at home, traitors plotting abroad and the threat of invasion testing Henry’s regime to the breaking point, Cromwell’s robust imagination sees a new country in the mirror of the future. But can a nation, or a person, shed the past like a skin? Do the dead continually unbury themselves? What will you do, the Spanish ambassador asks Cromwell, when the king turns on you, as sooner or later he turns on everyone close to him?

With The Mirror & the Light, Hilary Mantel brings to a triumphant close the trilogy she began with Wolf Hall and Bring Up the Bodies. She traces the final years of Thomas Cromwell, the boy from nowhere who climbs to the heights of power, offering a defining portrait of predator and prey, of a ferocious contest between present and past, between royal will and a common man’s vision: of a modern nation making itself through conflict, passion and courage.

"It is magnificent…A masterpiece that will keep yielding its riches, changing as its readers change, going forward with us into the future . . . Mantel is still exuberantly rethinking what novels can do. Not since Bleak House has the present tense performed such magic. The narrative voice rides at times like a spirit or angel on thermals of vitality, catching the turning seasons, the rhythms of work and dreams, cities and kitchens and heartbeats." — The Guardian

"Hilary Mantel’s Wolf Hall novels make 99 per cent of contemporary literary fiction feel utterly pale and bloodless by comparison. After a few sentences of The Mirror & the Light – a few words, even – you’re thinking, yes, this is how it should be done . . . Mantel has taken us to the dark heart of history. 'The past is not a rehearsal, it is the show itself,' as she has said. And what a show" — The Times (UK)

"Hilary Mantel has written an epic of English history that does what the Aeneid did for the Romans and War and Peace for the Russians. We are lucky to have it. As Cromwell approaches his end, cast off by an ungrateful master, Mantel pulls together the strands of his life into a sublime tapestry."  — Telegraph (UK)

"Ambitious, compassionate, clear-eyed yet emotional, passionate and pragmatic, The Mirror & the Light lays down a marker for historical fiction that will set the standard for generations to come."  — Independent (UK)

"It's the capstone on an amazing feat of sustained achievement."  — Daily Mail (UK)

"What Mantel gets so brilliantly right are the intimate details that counted for everything in a Renaissance court – the gossip, the importance of sheer proximity to the monarch, how rumour passes through ladies in waiting, the way the king’s very chamber pot is treated reverently…So, to cut to the chase, does it merit another Booker? Yes it does." — Evening Standard (London)

“Mantel’s style remains exhilarating: It is a conflation of expansiveness and precision, refined across her career, which has no peer. . . It is a demanding novel, assuming intelligence and deep engagement in its readers . . . The rewards are unrivalled – it is a book not read, but to be lived.” — Daily Telegraph (London)

HILARY MANTEL is the author of fourteen books, including A Place of Greater Safety, Beyond Black, the memoir Giving Up the Ghost and the short-story collection The Assassination of Margaret Thatcher. Her two most recent novels, Wolf Hall and its sequel, Bring Up the Bodies, have both been awarded the Man Booker Prize—an unprecedented achievement.