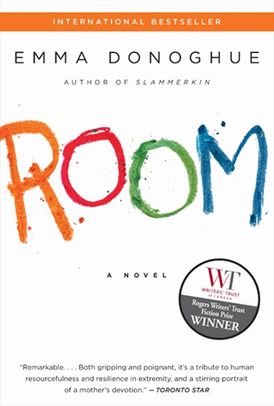 To five-year-old Jack, Room is the world. It’s where he was born. It’s where he and Ma eat and sleep and play and learn. There are endless wonders that let loose Jack’s imagination: the snake under Bed that he constructs out of eggshells; the imaginary world projected through the TV; the coziness of Wardrobe, where Ma tucks him in safely at night, in case Old Nick comes.

Room is home to Jack, but to Ma, it’s the prison where she’s been held since she was nineteen—for seven long years. Through her fierce love for her son, she has created a life for him in that eleven-by-eleven-foot space. But Jack’s curiosity is building alongside Ma’s own desperation, and she knows that Room cannot contain either indefinitely.

Told in the inventive, funny and poignant voice of Jack, Room is a celebration of resilience—and a powerful story of a mother and son whose love lets them survive the impossible.

Born in Dublin in 1969, EMMA DONOGHUE is an Irish emigrant twice over: she spent eight years in Cambridge, England, before moving to Canada’s London, Ontario. She is best known for her novels, which range from the historical (The Wonder, Slammerkin, Life Mask, The Sealed Letter) to the contemporary (Akin, Stir-Fry, Hood, Landing). Her international bestseller Room was a New York Times Best Book of 2010 and was a finalist for the Man Booker, Commonwealth and Orange Prizes; her screen adaptation, directed by Lenny Abrahamson, was nominated for four Academy Awards.