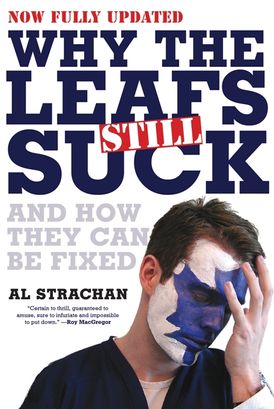 Every year since 1968, Leaf fans hope that the new season will be the one that breaks the Stanley Cup drought. Sadly, those hopes are usually dashed mid-season. In the biggest hockey market in North America, with such a huge and loyal fan base, how has the team missed it for so long?

It’s the question that every Leafs fan asks (and has been afraid to have answered). Now updated to include both the disastrous 2009–10 season and the 2010–11 season, Al Strachan covers what’s gone wrong and why. With behind-the-scenes access and forty years of fascinating Leafs personalities and stories, Al discusses

For fans who love the Leafs (and those who love to hate them), Why the Leafs Still Suck is a revealing and sometimes shocking inside look at professional hockey.

AL STRACHAN is the author of I’m Not Making This Up and Go to the Net, and the co-author of Don Cherry’s Hockey Stories and Stuff. He has appeared regularly on Hockey Night in Canada, Sirius Radio and FoxSports.com, and he has been writing about the NHL for more than thirty-five years.

Other Works by Al Strachan