The Assassination of Digna Ochoa 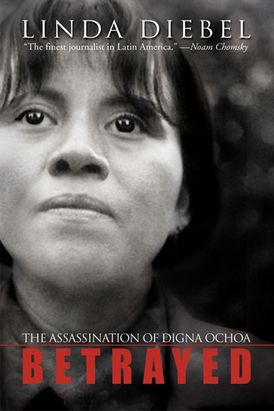 The Assassination of Digna Ochoa

Despite a note beside her body addressed to other "sons-of-bitch" human rights lawyers, the Mexican government ruled Digna Ochoa’s violent death "probable suicide" and slammed the case shut in July 2003. But Linda Diebel, a three-time recipient of the Amnesty International Media Award, will not let Ochoa’s story die. Here is her chilling account of a cold-blooded murder and a cover-up that reaches into the top echelons of the Mexican government. Tracing Ochoa’s extraordinary rise from the streets to become a champion of Mexico’s most persecuted peoples, Diebel uncovers a byzantine plot surrounding Ochoa’s death. From the corridors of presidential power, to the Vatican, to jungles inhabited by Zapatistan rebels, Betrayed is a riveting exposé, a depiction of friendship and betrayal, a love story and a testament to the Mexican people’s continuing fight for truth and dignity.

LINDA DIEBEL, a multi-award-winning Canadian journalist, was Washington bureau chief for the Toronto Star and a long-time correspondent in Latin America, based in Mexico City. She is a winner of Canada’s National Newspaper Award and a three time recipient of the Amnesty International Media Award for reports from Mexico, Haiti and Colombia. She lives in Toronto.

Other Works by Linda Diebel