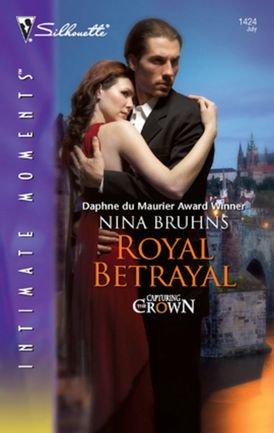 She was the king's private physician. Until the explosion tore through the royal palace, leaving Zara Smith with disturbing visions and no memory. A risky place to be in a sovereignty rife with intrigue and danger in the form of one roguishly sexy doctor with an irresistible bedside manner....

Famed medical consultant Walker Shaw was thrilled when his new patient turned out to be the passionate blue blood with whom he'd shared an unforgettable night seven years before. Walker was determined to reignite Lady Zara's memories of their connection and prove to his once and future lover that dreams could come true....

The mother of five children, Kylie Brant claims she began writing to save her sanity. Plotting stories became her method of escape from the reality of constant ball games, chauffeuring kids, and refereeing minor disagreements between her perfect offspring.

In 1992 she was elated to get a call from Silhouette offering to buy her second novel. Home with laryngitis at the time, she still managed to croak out agreement, and her career was born. A few months later she went on to sell Rancher s Choice, the first manuscript she'd written.

Kylie is married to her high school sweetheart, and they make their home in Iowa. She insists that all her heroes are based on her husband of 23 years because he possesses that most heroic of all qualities - ironing skills. Those abilities come in handy, as she juggles a full time teaching job with writing and a family.

Doing things the easy way has never held much appeal for this multi award-winning author. She graduated with high honours from the University of Northern Iowa. A graduation photo shows her in cap and gown holding her two sons, one aged 16 months and the other three weeks. She went on to obtain a teaching job working with learning-disabled children while completing her master's degree at night and during summers.

There was a time in my life when I could imagine myself as a life-long student, she recalls. I actually toyed with the idea of pursuing a doctorate. But instead, my life took a spin and I ended up writing romances. I've never regretted it! Her family has since been completed by the birth of another son and a set of twins, a boy and a girl.

Kylie's books are regularly featured on bestseller lists. With over a million copies of books in print, her novels have been distributed in 20 countries and released in seven languages.

Family and friends are the main focus of Kylie's life. When she isn't writing or teaching, she enjoys reading and flower gardening. She loves traveling, preferring beach, ocean, and room service. Readers may write her at: P.O. Box 231, Charles City, IA 50616.

Other Works by Nina Bruhns