The Empress of Time 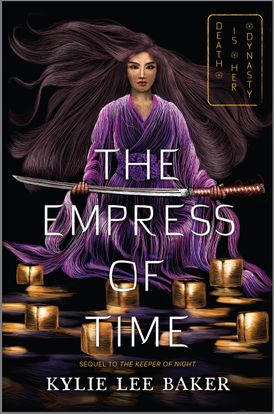 The Empress of Time

“Sharp and seductive…a fantasy with teeth.” —Julie C. Dao, author of Forest of a Thousand Lanterns on The Keeper of Night

In this riveting sequel to The Keeper of Night, a half Reaper, half Shinigami soul collector must defend her title as Japan’s Death Goddess from those who would see her—and all of Japan—destroyed.

Death is her dynasty.

Ren Scarborough is no longer the girl who was chased out of England—she is the Goddess of Death ruling Japan’s underworld. But Reapers have recently been spotted in Japan, and it’s only a matter of time before Ivy, now Britain’s Death Goddess, comes to claim her revenge.

Ren’s last hope is to appeal to the god of storms and seas, who can turn the tides to send Ivy’s ship away from Japan’s shores. But he’ll only help Ren if she finds a sword lost thousands of years ago—an impossible demand.

Together with the moon god Tsukuyomi, Ren ventures across the country in a race against time. As her journey thrusts her in the middle of scheming gods and dangerous Yokai demons, Ren will have to learn who she can truly trust—and the fate of Japan hangs in the balance.

Praise for The Keeper of Night

"Sharp and seductive…a fantasy with teeth." —Julie C. Dao, author of Forest of a Thousand Lanterns

"The Keeper of Night is an absolutely thrilling tale of one girl's search for identity and a sense of belonging. With its rich worldbuilding, high-stakes and well-drawn characters, Kylie Lee Baker has created a must-read tale." —June Hur, author of The Silence of Bones

"A triumphant debut, this thrilling fantasy tackles death, clad with a heroine unafraid to wrench a soul from the depths of a being and venture to the darkest of underworlds. A must for those in search of a place to call their own." —SLJ, starred review

"With themes of belonging, identity, family, and love, The Keeper of Night is a wickedly delightful read that perfectly blends a rich historical setting with magic and mystery." —The Nerd Daily -

Kylie Lee Baker is the author of The Keeper of Night. She grew up in Boston and has since lived in Atlanta, Salamanca, and Seoul. Her writing is informed by her heritage (Japanese, Chinese, and Irish), as well as her experiences living abroad as both a student and teacher. She has a BA in creative writing and Spanish from Emory University and a master of library and information science degree from Simmons University.

Other Works by Kylie Lee Baker