Assassination, Conspiracy, and the Forgotten Trial of Jack Ruby 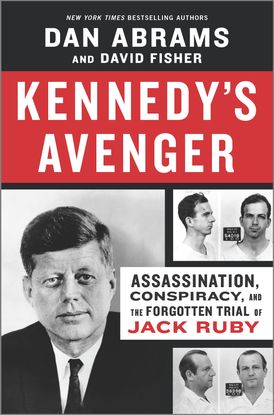 Assassination, Conspiracy, and the Forgotten Trial of Jack Ruby

New York Times bestselling authors Dan Abrams and David Fisher bring to life the incredible story of one of America’s most publicized—and most surprising—criminal trials in history.

No crime in history had more eyewitnesses. On November 24, 1963, two days after the killing of President Kennedy, a troubled nightclub owner named Jack Ruby quietly slipped into the Dallas police station and assassinated the assassin, Lee Harvey Oswald. Millions of Americans witnessed the killing on live television, and yet the event would lead to questions for years to come.

It also would help to spark the conspiracy theories that have continued to resonate today.

Under the long shadow cast by the assassination of America’s beloved president, few would remember the bizarre trial that followed three months later in Dallas, Texas. How exactly does one defend a man who was seen pulling the trigger in front of millions? And, more important, how did Jack Ruby, who fired point-blank into Oswald live on television, die an innocent man?

Featuring a colorful cast of characters, including the nation’s most flamboyant lawyer pitted against a tough-as-Texas prosecutor, award-winning authors Dan Abrams and David Fisher unveil the astonishing details behind the first major trial of the television century. While it was Jack Ruby who appeared before the jury, it was also the city of Dallas and the American legal system being judged by the world.

"A fascinating blend of courtroom drama and legal analysis." -The Wall Street Journal

"Clear, straightforward writing and superb research that pays attention to tension as well as humor make this riveting courtroom drama that feels as alive as it did it 1963." -NPR

"Abrams and Fisher mine transcripts and news coverage to dramatize the trial as it unfolded... a bright spotlight on well-worn ground." -Kirkus Reviews

"“An engrossing, lively and expertly crafted courtroom drama filled with colorful characters and having significant resonance for the present.” -The Washington Post


“A fresh, detailed look at Jack Ruby and his trial…. Followers of all things regarding the JFK assassination will be fascinated by this account of one of the most unique trials of the twentieth century.” –Booklist

“Dan Abrams is a favorite author of mine because of his storytelling ability and how he makes history come alive. His latest book recounts the trial of Jack Ruby, who shot Lee Harvey Oswald in cold blood. The trial adds color and texture to the lawyers, courtroom, and historical events.” –Forbes

“Abrams and Fisher’s narrative is crisp and clear, yet able to deliver a riveting courtroom drama for their readers.” –Virginia Gazette

“Abrams and Fisher do a superb job of clearly presenting the issues in this remarkable and intensely dramatic trial.”
—Scott Turow on Theodore Roosevelt for the Defense

“Abrams and Fisher are gifted writers, and their prose is neither overly spare nor showy; they're clearly fascinated by the trial, and their enthusiasm for their subject matter shows.”
—NPR on Theodore Roosevelt for the Defense

"The authors do a remarkable job of spinning the court transcripts into a fascinating tale of intrigue and underscoring the men and the issues at play."
—Fredericksburg Book Review on John Adams Under Fire
-