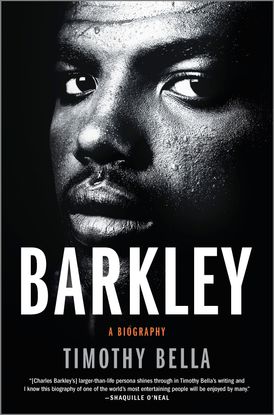 The definitive biography of Charles Barkley, exploring his early childhood, his storied NBA career, and his enduring legacy as a provocative voice in American pop culture

He’s one of the most interesting American athletes in the past fifty years. Passionate, candid, iconoclastic, and gifted both on and off the court, Charles Barkley has made a lasting impact on not only the world of basketball but pop culture at large.

Yet few people know the real Charles. Raised by his mother and grandmother in Leeds, Alabama, he struggled in his early years to fit in until he found a sense of community and purpose in basketball. In the NBA he went toe-to-toe with the biggest legends in the game, from Magic to Michael to Hakeem to Shaq. But in the years since, he has become a bold agitator for social change, unafraid to grapple, often brashly, with even the thorniest of cultural issues facing our nation today.

Informed by over 370 original interviews and painstaking research, Timothy Bella’s Barkley is the most comprehensive biography to date of one of the most talked-about icons in the world of sports.

“Charles is like a brother to me and there’s no one else like him. His larger-than-life persona shines through in Timothy Bella’s writing and I know this biography, of one of the world’s most entertaining people, will be enjoyed by many.”—Shaquille O'Neal

"Timothy Bella explores everything that's made Barkley, Barkley, a guy who lives his life just like he played basketball: brilliant, unapologetic and like nobody else out there. I have been a fan of this man for a minute. Get the book, salute the man."—Chuck D., rapper and front man of Public Enemy

When I’m asked who my favorite player was to cover, I usually bail out and name not just one player but a few, and even those names tend to change from decade to decade. But one remains: Sir Charles, hardly an original answer because most basketball writers of my generation would include him. Thanks to Timothy Bella, an outstanding journalist, for giving new life to a true American Original."—Jack McCallum, New York Times bestselling author of Dream Team

“We know first-hand and full well the kind of meticulous reporting and gifted writing skills Timothy Bella can bring to a book. Barkley is a vivid, mesmerizing portrait worthy of Sir Charles, arguably the most colorful and one of the most controversial figures in sport. We double dare you to put it down.”—Jeff Benedict and Armen Keteyian, #1 New York Times bestselling authors of the Tiger Woods

"A biography like Timothy Bella's Barkley is a validation of Charles' journey so far. Charles is a population of one—he's that unique. He's not following anybody else's footsteps; he's a trailblazer. He has changed lives and he doesn't even know it. You have got to read the book."—Julius Erving

“An authentic look into one of sports' most iconic figures. We all know the outspoken Charles Barkley; but Timothy Bella's biography takes us on a transparent journey into his entire life. It gives the readers an inner view of the Naismith Hall of Famer’s college and professional careers, family and personal philosophy on life."—Dawn Staley

“Charles Barkley had athleticism, grit and force. A true leader and someone I have looked up to for quite some time, he is fully captured in this book.”—Kevin Garnett

"A wonderfully entertaining and fulfilling biography of Sir Charles. Barkley may have never won an NBA championship, but he somehow managed to win other big things, mainly the hearts of the basketball public. Bella has offered us an opportunity to take the whole Barkley trip one more satisfying time."—Roland Lazenby, author of Michael Jordan: The Life

"Charles tells us…that when you love what you’re doing it’s not work. Reading Barkley wasn’t work either. I loved it!" —Reverend Jesse Jackson -

Timothy Bella is a staff writer and editor for the Washington Post's General Assignment team, focusing on national news. He was previously the deputy editor of Morning Mix.

Other Works by Timothy Bella