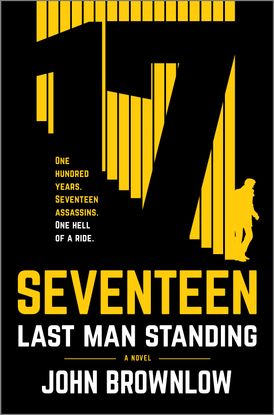 But you won't forget my number.

Behind the events you know are the killers you don’t. When diplomacy fails, we're the ones who gear up. Officially we don’t exist, but every government in the world uses our services. We’ve been saving the world, and your ass, for one hundred years.

Sixteen people have done this job before me. I am Seventeen. The most feared assassin in the world. But to be the best, you must beat the best. My next target is Sixteen, just as one day Eighteen will hunt me down. It’s a dog-eat-dog world and it gets lonely at the top. Nobody gets to stay for long. But while we're here, all that matters is that we win.

Visceral, cinematic and wildly addictive, Seventeen will keep you on the edge of your seat and live long in the memory. Until Eighteen comes along…

“A masterclass of a ride that actually delivers. Sensational.” —Bill Nighy

“Seventeen is a thriller with soul. John Brownlow has crafted a muscular and delightfully subversive novel with quick wit, a wicked sense of humor, and real heart beating underneath its rippling pectorals. It’s like a Bond movie made by the Coen brothers.” —Travis Knight, director of Transformers: Bumblebee and Kubo and the Two Strings

“This book launches like an RPG and doesn’t stop till it lights up the target. By turns harrowing, sly, knowing, and downright frantic, Seventeen makes spy stories fun again—a diabolical treat from start to finish.” —Giles Blunt, author of Forty Words for Sorrow

“Seventeen keeps you on the edge of your seat and guessing with every turn of the page. [This novel is] a fantastic and thrilling new entry into the modern-day spy genre, [and] Brownlow has fashioned something unique here with the promise of more (much more!) to come. Get in on the ground floor of what’s sure to be the next great spy series." —Rawson Marshall Thurber, director of Dodgeball, Central Intelligence, Skyscraper and Red Notice

"Seventeen is the most explosive spy thriller debut since I Am Pilgrim. Taut, exquisitely written and often wildly funny—this is James Bond meets Jack Reacher with enough quips and one liners to make Harlan Coben jealous. As a veteran of the screen, John Brownlow now proves his complete mastery of the page. You simply won’t find a more entertaining debut this year." —Matthew Richardson, author of My Name Is Nobody and The Insider


"Never has a book more deserved to be described as a thriller. This is the gripping and extraordinary story of Seventeen, the world's most feared assassin, and what happens when his past and the future catch up with him with terrifying consequences. John Brownlow tells the story with a wit and a skill which means this is one of the books [that] it is no cliché to say it was almost impossible to put down." —Alex Gerlis, author of Agent in Peril

“Seventeen reinvents the hitman novel. It's a cinematic rollercoaster, full of authentic emotion and high-octane action. The tension explodes off the pages; John Brownlow is a master of suspense.” ?Jeff Abbott, New York Times bestselling author of Traitor’s Dance

John Brownlow wrote the film Sylvia, which is about the relationship between Sylvia Plath and Ted Hughes, starring Gwyneth Paltrow and Daniel Craig; the TV series Fleming, about Ian Fleming’s work as a spy and the genesis of James Bond; and the TV series The Miniaturist, adapted from Jessie Burton’s bestselling novel. John holds dual British/Canadian citizenship and lives north of Toronto.

Other Works by John Brownlow