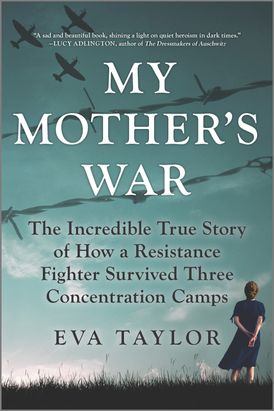 "A sad and beautiful book, shining a light on quiet heroism in dark times.” –Lucy Adlington, New York Times bestselling author of The Dressmakers of Auschwitz

The extraordinary story of Sabine Zuur, a beautiful, young Dutch resistance fighter who spent over two years in three concentration camps during World War Two, told by her daughter using an astonishing archive of personal letters

After her mother’s death, Eva Taylor discovered an astounding collection of documents, photos and letters from her time as a resistance fighter in Nazi-occupied Holland. Using the letters, she reconstructed her mother's experience in the underground resistance movement and then as a prisoner in the Amersfoort, Ravensbruck and Mauthausen concentration camps.

The letters reveal an amazing story of life during wartime, including declarations of love from her fiancé before his tragic death as a Spitfire pilot, prison notes smuggled out in her laundry, and passionate but sometimes terrifying messages from a German professional criminal who ultimately would save Sabine’s life.

A one-of-a-kind story of survival, My Mother’s War captures a remarkable life in the words of the young woman who lived it.

"There may be many hundreds of tales of resistance and resilience in World War Two, but there is something special about this haunting story, crafted from a poignant family archive. My Mother's War unfolds in a calm yet relentless manner, drawing the reader into the reality of Nazi occupation and imprisonment, as well as offering reflections on how life could have been - should have been - for all innocents caught up in war. A sad and beautiful book, shining a light on quiet heroism in dark times.”–Lucy Adlington, New York Times bestselling author of The Dressmakers of Auschwitz

“Here is a daughter’s compassionate examination of the pain her mother kept so carefully hidden. Taylor is acutely perceptive… this story of one woman’s courage reveals the complexity of relationships it took to survive three concentration camps. My Mother’s War is an important contribution to the work of bearing witness.” -Gwen Strauss, award-winning author of The Nine: The True Story of a Band of Women Who Survived the Worst of Nazi Germany

"My Mother’s War – the story of Sabine Zuur - is the very personal but truly captivating story of a young Dutch resistance fighter’s courage, resilience and determination to survive Hitler’s brutal regime and the horrors of the concentration camps. Unlike many books about the Nazi death camps, much of My Mother’s War focuses on the kindness of an obsessive German admirer at the Mauthausen camp who helps Sabine survive in an attempt to win her heart. The cache of letters discovered by the writer - written by her mother and the other central characters - describe in heart-breaking detail the persecution, oppression and deprivation Sabine endured, and bring an authenticity to the story that more dispassionate accounts of the war can never achieve. It’s a compelling read that will appeal to anyone who has an in interest in true WWII stories." —Doug Gold, internationally bestselling author of The Note Through the Wire

“I absolutely loved this amazing story of courage and survival. This book is heartbreaking and heartwarming at the same time and I found it difficult to put it down. Highly recommend to anyone who enjoys beautifully written war time memoirs.” —Lana Kortchik, bestselling author of Daughters of the Resistance

"It reads like a novel… a story worth telling.” -NRC Media
-

Eva Taylor is the daughter of Sabine Zuur and Peter Tazelaar, a major Dutch war hero. She was born in Utrecht, but has lived in Cheshire, England ever since she was eighteen.

Other Works by Eva Taylor