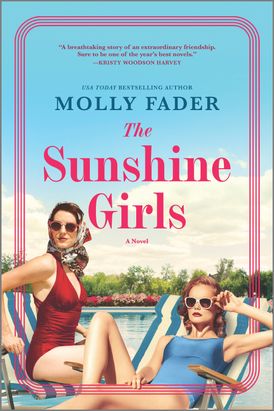 “A breathtaking story of an extraordinary friendship. Molly Fader has penned an unforgettable novel that is sure to be one of the year’s best.” —Kristy Woodson Harvey, New York Times bestselling author of The Wedding Veil

Two friends. A lifetime of secrets. One sparkling story.

1967 Iowa. Nursing school roommates BettyKay and Kitty don’t have much in common. BettyKay has risked her family’s disapproval to pursue her dreams away from her small town. Cosmopolitan Kitty has always relied on her beauty and smarts to get by and to hide a painful secret. Yet the two share a determination to prove themselves in a changing world, forging an unlikely bond on a campus unkind to women.

Before their first year is up, tragedy strikes, and the women’s paths are forced apart. But against all odds, a decades-long friendship forms, persevering through love, marriage, failure, and death, from the jungles of Vietnam to the glamorous circles of Hollywood. Until one snowy night leads their relationship to the ultimate crossroads.

Fifty years later, two estranged sisters are shocked when a famous movie star shows up at their mother's funeral. Over one tumultuous weekend, the women must reckon with a dazzling truth about their family that will alter their lives forever...

“When a famous movie star appears at their mother’s funeral, estranged sisters Clara and Abbie are stunned—and confused. Little do the sisters know, childhood truths they presumed undeniable are about to be upended. Told in alternating points of view, The Sunshine Girls is a breathtaking story of an extraordinary friendship and the transcendent power of a mother’s love. Molly Fader has penned an unforgettable novel that is sure to be one of the year’s best.”
—Kristy Woodson Harvey, New York Times bestselling author of The Wedding Veil

“The Sunshine Girls will have readers sitting on the edge of their seats…Jane Green and Jennifer Weiner fans will enjoy this novel about two unlikely friends and the secrets that united them.”
—Booklist (Starred Review)

“From the long hours and turmoil of nursing school in the sixties to the gritty and glamorous movie sets of Hollywood in the seventies and up to modern day, The Sunshine Girls takes the reader on a ride brimming with secrets and surprises around every turn. It’s a story of sisterhood and friendship, and the intersection of the two. A heartfelt, soulful book that examines how little we sometimes know about the people we think we know best.”
—Susie Orman Schnall, author of We Came Here to Shine and The Subway Girls

“The Sunshine Girls draws you in with its fascinating glimpse of Vietnam-era America—from the bustling wards of a small-town hospital to the glitzy movie sets of Hollywood. But the story really delivers in its tender and nuanced depiction of friendship, sisterhood, and self-realization. A worthwhile and rewarding read!”
—Amanda Skenandore, author of The Second Life of Mirielle West -

MOLLY FADER is the award-winning author of more than 40 romance novels under the pennames Molly O'Keefe and M. O'Keefe. She grew up outside of Chicago and now lives in Toronto. The McAvoy Sisters Book of Secrets is her first women's fiction novel.

Other Works by Molly Fader

The McAvoy Sisters Book of Secrets

The McAvoy Sisters Book of Secrets