The True Story of Black Bart, the Old West's Most Infamous Stagecoach Robber 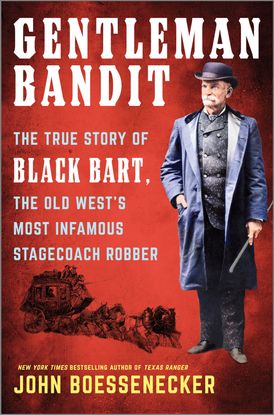 The True Story of Black Bart, the Old West's Most Infamous Stagecoach Robber

Black Bart is widely regarded today as not only the most notorious stage robber of the Old West but also the best behaved. Over his lifetime, Black Bart held up at least twenty-nine stagecoaches in California and Oregon with mild, polite commands, stealing from Wells Fargo and the US mail but never robbing a passenger. Such behavior earned him the title of a true “gentleman bandit.”

His real name was Charles E. Boles, and in the public eye, Charles lived quietly as a boulevardier in San Francisco, the wealthiest and most exciting city in the American West. Boles was an educated man who traveled among respectable crowds. Because he did not drink, fight or consort with prostitutes, his true calling as America’s greatest stage robber was never suspected until his final capture in 1883. Sheriffs searched and struggled for years to find him, and newspaper editors had a field day reporting his exploits. Legends and rumors trailed his name until his mysterious death, and his ultimate fate remains one of the greatest mysteries of the Old West.

Now historian John Boessenecker sheds new light on Black Bart’s beginnings, reputation and exploits, bringing to life the glittering story of the mysterious stage robber who doubled as a rich, genteel socialite in the golden era of the Wild West.

“An entertaining, well-researched foray into the life of a well-known but legend-layered outlaw.”–Kirkus Review -

John Boessenecker is the author of nine books, including New York Times bestseller Texas Ranger: The Epic Life of Frank Hamer, the Man Who Killed Bonnie and Clyde. He has received the Spur award from Western Writers of America, the Best Book award from Westerners International, and in 2011, 2013 and 2019 True West named him Best Nonfiction Writer. He has appeared frequently as a historical commentator on PBS, The History Channel, A&E, and other media. He lives near San Francisco, California.

Other Works by John Boessenecker