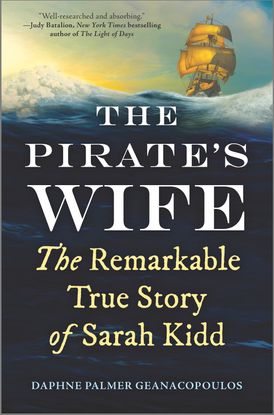 The dramatic and deliciously swashbuckling story of Sarah Kidd, the wife of the famous pirate Captain Kidd, charting her transformation from New York socialite to international outlaw during the Golden Age of Piracy

Captain Kidd was one of the most notorious pirates to ever prowl the seas. But few know that Kidd had an accomplice, a behind-the-scenes player who enabled his plundering and helped him outpace his enemies.

That accomplice was his wife, Sarah Kidd, a well-to-do woman whose extraordinary life is a lesson in reinvention and resourcefulness. Twice widowed by twenty-one and operating within the strictures of polite society in seventeenth- and eighteenth-century New York, Sarah secretly aided and abetted her husband, fighting alongside him against his accusers. More remarkable still was that Sarah not only survived the tragedy wrought by her infamous husband’s deeds, but went on to live a successful and productive life as one of New York’s most prominent citizens.

Marshaling in newly discovered primary-source documents from archives in London, New York and Boston, historian and journalist Daphne Palmer Geanacopoulos reconstructs the extraordinary life of Sarah Kidd, uncovering a rare example of the kind of life that pirate wives lived during the Golden Age of Piracy. A compelling tale of love, treasure, motherhood and survival, this landmark work of narrative nonfiction weaves together the personal and the epic in a sweeping historical story of romance and adventure.

"A fascinating and intriguing story about the woman behind one of the most iconic pirates of all. Geanacopoulos's compelling portrait of Sarah Kidd's turbulent and often tragic life, and her indomitable spirit, is full of dramatic twists and turns that will leave you wondering if there is any truth to the legend of Captain Kidd's hidden treasure."—Eric Jay Dolin, author of Black Flags, Blue Waters: The Epic History of America's Most Notorious Pirates

"After thousands of books written over the centuries it is not easy to say anything new about pirates, but that is precisely what Daphne Geanacopoulos has done in this lively tale of the remarkable Sarah Kidd.  Pirate-lovers worldwide will rejoice!"—Marcus Rediker, author of Villains of All Nations: Atlantic Pirates in the Golden Age


“Historian and author Daphne Palmer Geanacopoulos uses newly discovered primary source documents to bring the fearless and resourceful Sarah Kidd roaring back to life. The author’s impressive research, rich contextual detailing, and empathy for her subject all make for a riveting read.  A rollicking yarn replete with romance, buried treasure and revenge, The Pirate’s Wife enthralls!”—Heath Hardage Lee, award-winning author of The League of Wives:  The Untold Story of the Women Who Took on the U.S. Government to Bring Their Husbands Home


“The Pirate’s Wife falls under the category of narrative non-fiction but reads like a lively historical novel.  Not only does Daphne Palmer Geanacopoulos flesh out the story of the wife of the notorious pirate William Kidd, she brings to life the New York of the seventeenth and eighteenth century with meticulous research and rich prose.  I sailed right along with this saga. A jolly good ride.”—Sally Cabot Gunning, author of The Widow's War

“Even sea-faring outlaws crave safe harbor now and again, as The Pirate’s Wife demonstrates in its beautifully researched consideration of the marriage between Captain Kidd and his remarkable wife, Sarah. It is always a thrill when a writer shows us a world we think we already know in a new light, and Daphne Geanacopoulos has done just that.”—Madeleine Blais, Pulitzer prize winner and author of In These Girls, Hope is a Muscle


"Daphne Palmer Geanacopoulos has achieved something historical scholars dream of: bringing to light a fascinating story that is as entertaining as it is factual. In The Pirate’s Wife, readers are witnesses to both the thrills of upper society in colonial New York, and the harrowing and desperate descent into public scorn and destitution for those accused of piracy. Through all the challenges, Sarah Kidd, wife of the notorious Captain Kidd, fights a corrupt bureaucracy, using her feminine wiles and the occasional bar of gold to beg, cajole, and bribe both influential colonists and the English rulers to save her husband and their way of life. With meticulous research and stunning detail, this fast-paced story will have the reader turning the pages and tuning out the present world, which in some ways hasn‘t changed a bit."—Tracey Enerson Wood, international bestselling author of The Engineer’s Wife and The War Nurse

"A title like The Pirate’s Wife makes promises to the reader: adventure, danger,  betrayal, romance, and especially pirate treasure. Daphne Geanacopoulos  more than keeps those promises in this deeply researched and richly imagined exploration of the life of Sarah Kidd, the little known wife of one of history’s most infamous pirates. The end result is not only the previously buried story of one woman’s life—in itself a form of hidden treasure--but a detailed and sometimes surprising picture of women’s lives in colonial America."—Pamela Toler, Ph.D., author of Women Warriors: An Unexpected History


"A well-researched and absorbing account, The Pirate's Wife not only illuminates a formidable historical figure, but also sheds light on the history of women in 17th century America and on the politics of early New York."—Judy Batalion, New York Times bestselling author of The Light of Days: The Untold Story of Women Resistance Fighters in Hitler's Ghettos
-

Dr. Daphne Palmer Geanacopoulos is a historian, journalist and author of The Pirate Next Door: The Untold Story of Eighteenth Century Pirates' Wives, Families and Communities. Her writing has appeared in the New York Times, the Washington Post, Southern Living, Virginia Business and other outlets. She lives in South Yarmouth, Massachusetts, with her husband, David.

Other Works by Daphne Palmer Geanacopoulos