Fire on the Levee 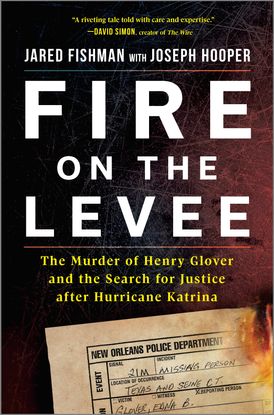 Fire on the Levee

The former federal prosecutor and founder of Justice Innovation Lab tells the story of his struggle to unravel the cover-up of a police shooting, and subsequent incineration of the shooting victim, in Hurricane Katrina–era New Orleans.

In 2009, Jared Fishman was a young prosecutor working on low-level civil rights cases in the Justice Department when a file landed on his desk. That folder contained two items: a story from The Nation magazine examining a mysterious death in New Orleans following Hurricane Katrina, and an autopsy report for a man named Henry Glover, whose charred remains were found in a burned-out car two weeks after the storm. The autopsy report, bafflingly, listed no cause of death. But according to The Nation story, a gravely wounded Glover had last been seen in a car driven by a New Orleans police officer.

Intrigued despite the lack of evidence, Fishman set out to learn what happened to Glover. He flew to New Orleans and teamed up with a rookie FBI agent, and together they started to track down anyone with information about what had happened to Glover on that day.

Fire on the Levee tells the story of a young idealistic prosecutor determined to bring the truth to light. The case would lead to major reforms in the New Orleans Police Department and ultimately change our understanding of race, policing and justice in post-Katrina New Orleans and beyond.

"A vital and eye-opening account of the quest to excavate the truth and find justice for one of Katrina's horrors. Fire on the Levee is both an important chapter in the history of police abuses and a blueprint of the hurdles to holding the blue line accountable."—Ronnie Greene, author of Shots on the Bridge: Police Violence and Cover-Up in the Wake of Katrina


"A true crime whodunit set against the backdrop of Hurricane Katrina where all the prime suspects are police. The effort to solve this senseless murder and its grisly cover-up is a miracle of dogged investigation, told in a way that keeps the reader turning the page. Mandatory reading for anyone who cares about better policing in the U.S."—Gary Rivlin, author of Katrina: After the Flood


“This is an important story that reflects the injustice and chaos of post-Katrina New Orleans. Jared Fishman and Joseph Hooper tell it brilliantly. Sadly, this story tells us as much about New Orleans whose Black population remains, for the most part, disrespected and vulnerable. This is a real page turner. The story of post-Katrina New Orleans is incomplete without this revealing tale.”—Roberta Brandes Gratz, author of We’re Still Here Ya Bastards: How the People of New Orleans Rebuilt Their City

“Fire on the Levee is a gripping true crime thriller about one of the most shocking police killings in recent history, and the obstacles to holding the police accountable. Jared Fishman moves beyond illuminating what is broken in the American justice system and insightfully points the way to how we can begin to fix it.” —Shane Bauer, author of American Prison: A Reporter’s Undercover Journey into the Business of Punishment and A Sliver of Light: Three Americans Imprisoned in Iran

“In the chaotic days after the flooding of New Orleans, the charred body of a man last seen in the custody of police officers is discovered, and it falls to a young federal prosecutor to determine what happened and why. The grievous case of Henry Glover—along with a number of others in the wake of Hurricane Katrina—exposed the entrenched secrecy and tribalism that underlies so much police violence in America. In Fire on the Levee, that prosecutor, Jared Fishman, with Joseph Hooper have told the tale with care and expertise.” —David Simon, creator of The Wire, Tremé and We Own This City
-

Other Works by Jared Fishman