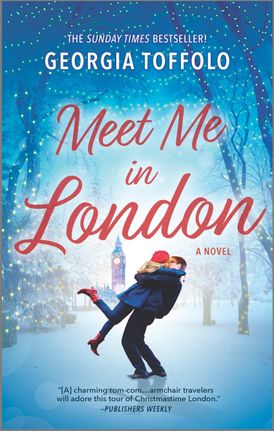 "Uplifting, romantic and festive—the perfect book to curl up with. I couldn’t put it down." —Rosie Nixon, editor in chief, Hello! magazine

His good intentions.
Her big break.
And the lie that will be the beginning of their love story—or the end…

Aspiring fashion designer Victoria Scott has big dreams of opening her own boutique in Chelsea, but after her vile ex cheated her out of their business venture, there’s little chance she’ll be quitting her day job any time soon. Single for the holidays is bad enough, but with a posh new department store set to open at the end of her road, her dreams are running on fumes.

Christmas has never felt less festive for Oliver Russell. While he may be the brains behind Russell & Co’s new London location, lying to his mother about having a girlfriend maybe wasn’t his smartest idea. But with his father’s health declining, Oliver knows how important it is for his parents to believe he’s settled down to carry on the family’s retail empire. Then a chance meeting with Victoria changes everything, and Oliver makes an offer that solves both their problems: she’ll pretend to be his girlfriend at the Russell & Co grand opening and he’ll let her showcase her designs.

As Oliver’s parents delight over their relationship, dating somehow escalates to engaged, and what started as a fake romance soon becomes too real to untangle. But when the secret Victoria’s been hiding about herself finally comes to light, will the truth prove to be too much to sustain their carefully constructed lies?

GEORGIA TOFFOLO is a UK-based broadcaster and TV personality. She has been a firm favorite with the public since her TV debut on Made in Chelsea, and winning over the hearts of viewers on I’m a Celebrity…Get Me Out of Here! Georgia resides in London with her beloved dog, Monty. Meet Me in London is her first novel.

Other Works by Georgia Toffolo

Meet Me at the Wedding