The Last of the Seven

A Novel of World War II 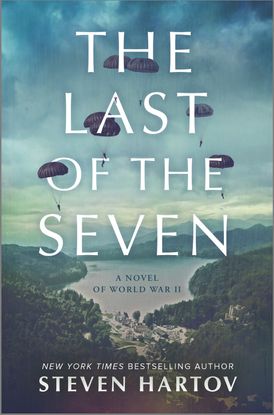 The Last of the Seven

A Novel of World War II

A spellbinding novel of World War II based on the little-known history of the X Troop—a team of European Jews who escaped the Continent only to join the British Army and return home to exact their revenge on Hitler’s military.

A lone soldier wearing a German uniform stumbles into a British military camp in the North African desert with an incredible story to tell. He is the only survivor of an undercover operation meant to infiltrate a Nazi base, trading on the soldiers’ perfect fluency in German. However, this man is not British-born but instead a German Jew seeking revenge for the deaths of his family back home in Berlin.

As the Allies advance into Europe, the young lieutenant is brought to recover in Sicily. There he is recruited by a British major to join the newly formed X Troop, a commando unit composed of German and Austrian Jews training for a top secret mission at a nearby camp in the Sicilian hills. They are all “lost boys,” driven not by patriotism but by vengeance.

Drawing on meticulous research into this unique group of soldiers, The Last of the Seven is a lyrical, propulsive historical novel perfect for readers of Mark Sullivan, Robert Harris and Alan Furst.

“A classic WWII raid story in the behind-the-lines tradition of The Guns of Navarone, Steven Hartov’s The Last of the Seven ticks like a detonator and explodes like a bomb. I read it [in] one rush and the book didn’t lose momentum the whole way. Hartov himself is the real deal, a veteran of IDF Intelligence and a paratrooper (currently a reserve major in the US Army). He delivers his tale with such vivid and authentic detail that you come away believing you too can speak Hochdeutsch, Yiddish, and Hebrew as you take on Hitler’s atomic labs deep in the heart of the Third Reich.” —Steven Pressfield, bestselling author of Gates of Fire and A Man at Arms

“The Last of the Seven is a beautifully told war story, written with stirring prose and painstakingly accurate detail. Hartov shares a little known but compelling slice of Second World War history where German Jewish escapees were employed behind enemy lines in British commando operations that carried extreme risk and high stakes. The plot is a nail-biter. The dialogue crackles. The characters are memorable. And the exotic settings are laid out with such historical precision that you’ll feel as if you are on the ground watching the horror, the sacrifice, the bravery, and the romance unfold in front of your eyes. Another absolute winner from Hartov." —Daniel Kalla, bestselling author of The Far Side of the Sky and The Darkness in the Light

"A gripping look back at WWII through the eyes of a war-torn unit of European Jews who are sent behind enemy lines to strike back at Hitler, Steven Hartov's The Last of Seven, opens fast and never lets up for a second. Impossible to put down, fans of Robert Harris and Andrew Gross will want to get their hands on this one the second it hits bookstores." —Ryan Steck, The Real Book Spy, and author of Fields of Fire

"The Last of the Seven is a story that is as beautifully crafted as it is tragic and brutal. Steven Hartov moves beyond an impeccably researched recounting of historical events, tapping into the vivid memories and raw emotions of one who lost everything under the Nazi reign of terror. It is deeply personal and highly compelling—a memorable novel of survival and revenge during the tumultuous era of World War II." – Taylor Moore, author of Down Range -

STEVEN HARTOV is the coauthor of the New York Times bestseller In the Company of Heroes, as well as The Night Stalkers and Afghanistan on the Bounce. For six years he served as Editor-in-Chief of Special Operations Report. He has appeared on CNN, MSNBC, CNBC, FOX, and most recently the History Channel’s Secret Armies. A former Merchant Marine sailor, Israeli Defense Forces paratrooper and special operator, he is currently a Task Force Commander in the New York Guard. He lives in New Jersey.

Other Works by Steven Hartov