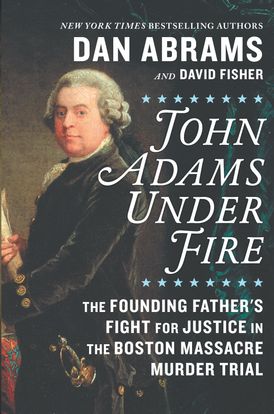 Honoring the 250th Anniversary of the Boston Massacre

The New York Times bestselling author of Lincoln’s Last Trial and host of LivePD Dan Abrams and David Fisher tell the story of a trial that would change history.

History remembers John Adams as a Founding Father and our country’s second president. But in the tense years before the American Revolution, he was still just a lawyer, fighting for justice in one of the most explosive murder trials of the era.

On the night of March 5, 1770, shots were fired by British soldiers on the streets of Boston, killing five civilians. The Boston Massacre has often been called the first shots of the American Revolution. As John Adams would later remember, “On that night the formation of American independence was born.” Yet when the British soldiers faced trial, the young lawyer Adams was determined that they receive a fair one. He volunteered to represent them, keeping the peace in a powder keg of a colony, and in the process created some of the foundations of what would become United States law.

In this book, New York Times bestselling authors Dan Abrams and David Fisher draw on the trial transcript, using Adams’s own words to transport readers to colonial Boston, a city roiling with rebellion, where British military forces and American colonists lived side by side, waiting for the spark that would start a war.


"The engrossing account of 18th century legal procedure and the color individuals involved in the colonies' most celebrated trial delivers another boost to John Adams's rising reputation." -HistoryNet

"Abrams and Fisher mine details about court proceedings from the era as well as incidents enflaming the raucous, rebellious mood in Boston." -Valdosta Daily Times


"A marvelous narrative. ...John Adams Under Fire fills an important void in the life of Massachusetts' most beloved patriot." -Virginia Gazette

"The authors do a remarkable job of spinning the court transcripts into a fascinating tale of intrigue and underscoring the men and issues at play." -Fredericksburg Book Review

"Those interested in trial case or the Revolutionary War time period will enjoy this look into history and at a trial that hasn't been covered much before." -Parkersburg News & Sentinel -