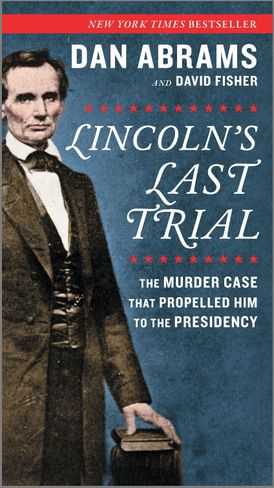 A Winner of the Barondess/Lincoln Award

A Washington Independent Review of Books Favorite Book of 2018

A Suspense Magazine Best Book of 2018

“Makes you feel as if you are watching a live camera riveted on a courtroom more than 150 years ago.” —Diane Sawyer

The true story of Abraham Lincoln’s last murder trial, a case in which he had a deep personal involvement—and which played out in the nation’s newspapers as he began his presidential campaign

At the end of the summer of 1859, twenty-two-year-old Peachy Quinn Harrison went on trial for murder in Springfield, Illinois. Abraham Lincoln was hired to defend him. This was to be his last great case as a lawyer.

What normally would have been a local case took on momentous meaning. Lincoln’s debates with Stephen Douglas had gained him a national following. He was being urged to make a run for the presidency. His reputation was untarnished, but should he lose this trial, the spotlight now focused so brightly on him might be dimmed.

The case also posed personal challenges for Lincoln. The victim had trained for the law in his office, and Lincoln had been his friend and his mentor. The accused killer, the young man Lincoln would defend, was the son of a close friend and supporter. And to win this trial he would have to form an allegiance with a bitter political rival.

Lincoln’s Last Trial captures the presidential hopeful’s dramatic courtroom confrontations in vivid detail as he fights for his client—but also for his own political future.

"Many aspects of the Harrison trial made it spellbinding and important. ... [Lincoln's Last Trial] adds a new layer of understanding about how Lincoln's mind worked as a consummate trial lawyer, and how that mind provided the platform for his political prowess." —Washington Independent Review of Books

"A vivid portrait of Lincoln, other attorneys, what happened in the tragic case and the era.... Lincoln's Last Trial may represent his last major case as an attorney but hopefully it is just the beginning of a series of history books from Abrams and Fisher." --Valdosta Daily Times

"[The case] cemented Lincoln's image as a courtroom star—and Abrams and Fisher have made the most of their material, polishing a musty transcript into an entertaining slice of life."—USA Today

"Dan Abrams and David Fisher write the heart-pounding pulse of history. Abraham Lincoln: the dusty shoes, the weary eyes, the Jedi mastery of a jury in a true case of life and death. So pull up a chair. This book not only brings a rare transcript to life, it makes you feel as if you are watching a live camera riveted on a courtroom more than 150 years ago."—Diane Sawyer


"Surprisingly, until Abrams and Fisher took the initiative, there was no book giving complete coverage to Lincoln's service as lead defense counsel in the four-day murder trial State of Illinois vs Peachy Quinn Harrison... spellbinding and important."—Texas Bar Journal

"The authors give readers a moment-by-moment account of the murder trial, which featured a well-liked young victim, a claim of self-defense, [and] a deathbed admission... Lincoln enthusiasts will find the illumination of his preternatural legal skills a worthy subject; casual readers will find the centerpiece murder trial an engrossing legal thriller."—Publishers Weekly

"Legal affairs journalist Abrams and coauthor Fisher illuminate a key marker on Abraham Lincoln's path to the White House... The transcripts reveal Lincoln at his best, fighting for a cause he believed in with brilliance and passion—qualities that would serve him so well as president."—Booklist

"Abrams and Fisher quote generously from Hitt's transcript to bring into sharp focus the witness-by-witness testimony and courtroom proceedings."—Library Journal

"Dan Abrams tells the story of Lincoln's last trial as an immersive true crime and courtroom drama experience, with impeccable research and highly entertaining digressions on such topics as 19th century jury selection."—Crimereads

"We all know the story of Abraham Lincoln the wartime president, the defender of the Union, and the emancipator of the slaves. But Abraham Lincoln, the defense lawyer? Dan Abrams and David Fisher recount the engaging story of Lincoln's last trial, occurring on the cusp of the Civil War. An entertaining book filled with twists and turns and tailor-made for Civil War buffs."—Jay Winik, author ofApril 1865and1944

"Lincoln's wartime leadership overshadows his life as a lawyer. But you can't understand one without the other. In this rich and previously unexplored corner of history, the authors take you inside the courtroom to watch Abraham Lincoln - at the height of his powers as a lawyer and on the edge of eternal fame - as he tries a thrilling murder trial to a jury."—Chris DeRose, New York Timesbestselling author ofThe Presidents' War,Congressman Lincoln, andFounding Rivals