Putting Innovation To Work In Your Business 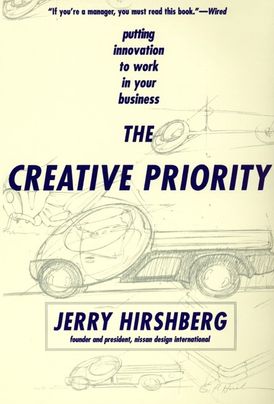 Putting Innovation To Work In Your Business

How does your company define creativity? Or doescreativity define your company? In this remarkable book, Jerry Hirshberg, founder and president of Nissan Design International (NDI), distills his experience as leader of the world's hotbed of automotive innovation and reveals his strategy for designing an organization around creativity.

In The Creative Priority Hirshberg weaves together enlightening real-world anecdotes with the story of NDI's genesis to illustrate eleven interlocking strategies that came to define NDI's creative priority. Richly illustrated with NDI's elegant designs and sketched, The Creative Priority is at once a compelling narrative, a rich store of hands-on experience, and a grab bag of breakthrough insights that can help your business perform its most vital function.

In 1980, Jerry Hirshberg ended a 16-year stint as an executive designer at General Motors, where he headed design for Pontiac and Buick, and accepted the position of founding director and eventually President of Nissan Design International, Inc. This unique corporate hybrid has become a creative hotbed of automotive innovation, producing such cutting edge designs as the first Nissan Pathfinder, Altima, Maxima, Pulsar NX and Quest minivan, the Infiniti J30 and the Mercury Villager for Ford. Along the way, owing to an intriguing fixture of the agreement he forged between NDI and Nissan, Hirshberg's team also designs computer concepts for Apple and Motorola, golf clubs for Taylor Made (including the famed 'Bubble Burner'), medical instruments, ski-boots, yachts and pre-school daycare furniture for an international list of clients.

Born in Cleveland, Ohio in 1939, Mr. Hirshberg has spent a lifetime dealing with the creative process. Along with being a designer, he is a consummate painter and classical musician. He scored one of his earliest creative successes with the rock-and-roll hit 'Sparkling Blue,' adopting the stage name Jerry Paul, and was the occasional opening act for such singers as Bobby Rydell, Fabian and Frankie Avalon. He studied Mechanical Engineering at Ohio State University and graduated with honors in Design from the Cleveland Institute of Art, with further study in Europe on a Mary C. Page Fellowship.

He has served on the Board of Trustees for the Cleveland Institute of Art, the San Diego Museum of Contemporary Art, the Board of Advisors for the Graduate School for Pacific and International Studies at UCSD and the Mayor's Growth Management Task Force for San Diego. He has been a member of the Design Arts Panel for the National Endowment for the Arts in Washington, D.C., and was a member of a select group of the country's leading designers invited to Little Rock, Arkansas to consider the implications of Design for the American economy. He chaired the national IDEA Awards program co-sponsored by Business Week and the Industrial Design Society of America, of which he has served as a national director.

Mr. Hirshberg has lectured at such universities as Harvard, Berkeley, Stanford, UCLA and Brown, many of which now teach the principles he and his colleagues developed at NDI. He has also addressed a broad variety of professional organizations and audiences worldwide, and has been the subject of several documentary films and television specials in Europe, for PBS in America, and for British television. He speaks on a wide variety of subjects ranging from design and automobiles to public art and creativity in business. He has even addressed the application of his ideas on creative thinking to leading police departments.

The father of sons Eric, a graphic design and advertising executive, and Glen, a writer and teacher, he works and lives with his wife Linda, a Ph.D. Clinical and Organizational Psychologist and President of Applied Behavioral Systems, in Del Mar, California.

Other Works by Jerry Hirshberg