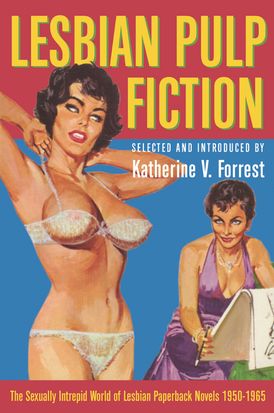 
Through the darkness, you can see figures gathered in twos and threes – the glowing tip of a cigarette, a close-manicured hand draped over a shoulder, heads turning to study the new arrival. Someone moves toward you, snapping a lighter open. Step into the twilight world of lesbian pulps.

In 1950, Fawcett founded their Gold Medal imprint, inaugurating the reign of lesbian pulp fiction. These were the books that small-town lesbians and prurient men bought by the millions – cheap, easy to find in drugstores, and immediately recognizable by their lurid covers: often a hard-looking brunette standing over a scantily-clad blonde or a man gazing in tormented lust at a lovely, unobtainable lesbian. For women leading straight lives, here was their confirmation that they were not alone and that darkly glamorous, “gay” places like Greenwich Village existed. In the over-heated prose typical of the genre, these books document the emergence of a lesbian subculture in postwar America. Some – especially those written by lesbians – offered sympathetic and realistic depictions of “life in the shadows,” while others (no less fun to read now) were smutty, sensational tales of innocent girls led astray. Grande dame of lesbian literature Katherine V. Forrest presents a rich survey of the best of the pulps, including work by Ann Bannon, Vin Packer, Marion Zimmer Bradley (writing as Miriam Gardner), Brigid Brophy, and many others.

Other Works by Katherine V. Forrest