How Cooking in Paris Saved Me 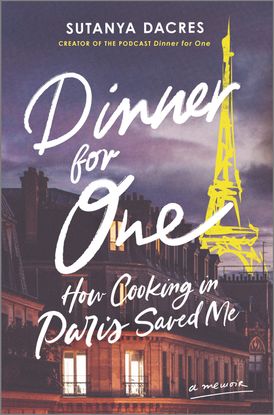 How Cooking in Paris Saved Me

From podcast host Sutanya Dacres comes Dinner for One, an unforgettable memoir of how she rebuilt her life after her American-in-Paris fairy tale shattered, starting with cooking dinner for herself in her Montmartre kitchen

When Sutanya Dacres married her French boyfriend and moved to Paris at twenty-seven, she felt like she was living out her very own Nora Ephron romantic comedy. Jamaican-born and Bronx-raised, she had never dreamed she herself could be one of those American women in Paris she admired from afar via their blogs, until she met the man of her dreams one night in Manhattan. A couple of years later, she married her Frenchman and moved to Paris, embarking on her own “happily-ever-after.” But when her marriage abruptly ended, the fairy tale came crashing down around her.

Reeling from her sudden divorce and the cracked facade of that picture-perfect expat life, Sutanya grew determined to mend her broken heart and learn to love herself again. She began by cooking dinner for one in her Montmartre kitchen. Along the way, she builds Parisienne friendships, learns how to date in French, and examines what it means to be a Black American woman in Paris—all while adopting the French principle of pleasure, especially when it comes to good food, and exploring what the concept of self-care really means.

Brimming with charm, humor, and hard-won wisdom, Sutanya's story takes you on an adventure through love, loss, and finding where you truly belong, even when it doesn’t look quite how you expected.

"An anti-fairytale that's all the more enthralling for being representative, raw, and real... Sutanya in Paris is so much greater than Emily in Paris." —Lauren Collins, author of When in French


“Dacres is at her best when indulging readers in her culinary experiences—particularly the cathartic act of cooking solo that, post-divorce, allows her to heal… Those craving a hopeful comeback story will find much to savor.” —Publishers Weekly


“Dacres—whose podcast that shares this book's title is now in its fourth season—writes honestly about identity and the pressures we put on ourselves to fit in. Sharing the ways she creates a home in Paris that fits who she truly is, one meal at a time, her work speaks directly to readers.” —Booklist


“A new take on self-care, Sutanya’s journey will take lucky readers on an intercontinental voyage in food, love, loss, and rediscovery in her debut memoir.” —Zibby Owens, from her Good Morning America column
-

Sutanya Dacres is the creator and host of the podcast Dinner for One, which has been featured in The New York Times and BBC Radio Hour, among other outlets. She has held a number of copywriting positions in New York City and Paris. Having grown up in New York City, she currently resides, and cooks dinners for one, in the Montmartre neighborhood of Paris. Dinner for One is her first book.

Other Works by Sutanya Dacres