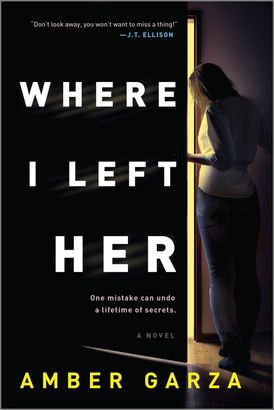 "In this high-tension domestic drama, nothing is as it seems. Don’t look away, you won’t want to miss a thing!” —J.T. Ellison, USA TODAY bestselling author of Her Dark Lies

"Garza establishes herself once again as a master of domestic suspense . . . a pitch-perfect thriller.” —Mindy Mejia, bestselling author of Everything You Want Me To Be

Whitney had some misgivings when she dropped her increasingly moody teenage daughter, Amelia, off at Lauren’s house. She’d never met the parents, and usually she’d go in, but Amelia clearly wasn’t going to let something so humiliating happen, so instead Whitney waved to her daughter before pulling away from the little house with the roses in front.

“[A] stellar psychological thriller…The tension builds as the perfectly orchestrated storylines converge in a truly surprising ending. This is impossible to put down.” – Publishers Weekly (Starred)

“Amber Garza’s Where I Left Her taps into every parent’s worst nightmare, a child gone missing, and worse, the discovery of a hidden internet world that shows they’ve been hiding a life from you. In this high-tension domestic drama, nothing is as it seems. Don’t look away, you won’t want to miss a thing!” —J.T. Ellison, USA TODAY bestselling author of Her Dark Lies

“Amber Garza establishes herself once again as a master of domestic suspense with WHERE I LEFT HER, in which a teenager’s disappearance forces a family’s secrets to the light in this pitch-perfect thriller. Vibrant characters and precisely laid clues kept me hooked until the very last page.” —Mindy Mejia, bestselling author of Everything You Want Me To Be and Strike Me Down

“Books like WHERE I LEFT HER by Amber Garza are a reminder of why thrillers are my favourite genre. This is a tale that’s dark and twisted, one where everybody has secrets galore, and the characters will have you shifting allegiances multiple times over. And that ending! It’ll blow your mind. More, please!” —Hannah Mary McKinnon, bestselling author of Sister Dear
-