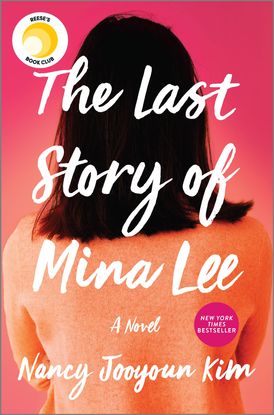 Riveting and unconventional, The Last Story of Mina Lee traces the far-reaching consequences of secrets in the lives of a Korean immigrant mother and her daughter

Margot Lee's mother is ignoring her calls. Margot can’t understand why, until she makes a surprise trip home to Koreatown, LA, and finds that her mother has suspiciously died. Determined to discover the truth, Margot unravels her single mother’s past as a Korean War orphan and an undocumented immigrant, only to realize how little she truly knew about her mother, Mina.

Thirty years earlier, Mina Lee steps off a plane to take a chance on a new life in America. Stacking shelves at a Korean grocery store, the last thing she expects is to fall in love. But that moment leads to repercussions for Mina that echo through the decades, leading up to the truth of what happened the night of her death.

Told through the intimate lens of a mother and daughter who have struggled all their lives to understand each other, The Last Story of Mina Lee is a powerful and exquisitely woven debut novel that explores identity, family, secrets, and what it truly means to belong.

“Painful, joyous... A story that cries out to be told.” —Los Angeles Times

“Kim is a brilliant new voice in American fiction.” —Alexander Chee, author of How to Write an Autobiographical Novel

“Suspenseful and deeply felt.” —Chloe Benjamin, author of The Immortalists

“A timely, important novel... Fans of Celeste Ng won't be able to put down this heartfelt, cross-generational novel about the powerful bond and fragility of family and what it really means to strive for the “American dream.”" —Popsugar

“The book, delicately understated in style, offers lessons in racism from the viewpoints of both mother and daughter. But the matter of tracking Mina’s killer provides a steady stream of pure sleuthing that is authentic and persuasive.” —Toronto Star

“The plotline smoothly shifts from the present to the past and back as Mina’s stories pull us into life in Koreatown... a sensitive and moving family saga.” —Mystery Scene Magazine

"Kim has a gift for page-turning plot.... A moving tale of a mother and daughter finding each other, a reunion made all the more poignant by coming too late." —Seattle Times

"A moving look at what immigrants to America go through before their journey and what they lose upon arrival, and how their American children can be caught between worlds." —Alyssa Cole, CrimeReads

“Haunting and heartbreaking, troubled threads between a mother and daughter blend together in a delicate and rich weave… With both sadness and beauty, [Kim] describes grief, regret, loss, and the feeling of being left behind. Fans of Amy Tan and Kristin Hannah will love Kim's brilliant debut.” —Booklist, STARRED review

"A magnificent exploration of a mother-daughter bond even when words fail them, when past stories and heartbreaks remain untold.” —San Diego Union Tribune

“Suspenseful and deeply felt, The Last Story of Mina Lee begins when Margot Lee discovers her mother's death before reeling back in time to explore the secrets that divided Mina and Margot—as well as those that bound them together. Nancy Jooyoun Kim's debut artfully explores a diverse range of immigrant experiences, the meaning of family and home, and the nature of language—how it can be an ocean that divides, or a bridge that connects. In the process, The Last Story of Mina Lee raises questions about the reality of the American dream and illuminates stories that often go untold, in life as well as fiction.” —Chloe Benjamin, New York Times bestselling author of The Immortalists

"In The Last Story of Mina Lee, Nancy Jooyoun Kim explores with tenderness and grace the intricate web of guilt, love and secrecy that entangles a mother and daughter. Powerful and poignant, this riveting novel speaks to the complexities of the immigration experience while keeping the reader enthralled by the mystery of the mother's suspicious death." —Jean Kwok, New York Times bestselling author of Searching for Sylvie Lee

“Nancy Jooyoun Kim’s debut carefully illuminates the two sides of the silence between a Korean immigrant mother and her Korean American daughter, a silence only too familiar to many of us—and emerges with a stunningly powerful and original novel about social class, immigration and family. Kim is a brilliant new voice in American fiction.” —Alexander Chee, bestselling author of How to Write an Autobiographical Novel

“The Last Story of Mina Lee is a fierce, gripping call to love and memory. Nancy Jooyoun Kim has written a beautiful debut novel that is unafraid to delve into the scary, deeply vulnerable places of our hearts. It's a riveting dance between mother and daughter, moving fluidly back and forth through time, documenting the quiet traumas that can divide generations. Tremendously readable, The Last Story of Mina Lee is a real page-turner and Nancy Jooyoun Kim is a knockout.” —Kristen Arnett, New York Times bestselling author of Mostly Dead Things

“Nancy Jooyoun Kim writes with brilliant exactitude about the anxious topographies of being a mother and a daughter, and the choices that lead to migration. The Last Story of Mina Lee is a confident and gripping account of where families bury secrets and what happens when you dig.” —Ingrid Rojas Contreras, bestselling author of Fruit of the Drunken Tree

“In her stunning debut, Nancy Jooyoun Kim weaves together two poignant story lines: Mina Lee, an immigrant flees tragedy in Korea for a new start in Southern California. When she mysteriously dies, her American-born daughter, Margot, seeks out the truth of what happened. Gripping and gritty, The Last Story of Mina Lee is a story of their yearning, their struggle, and the enduring mystery of family. Unforgettable.” —Vanessa Hua, bestselling author of A River of Stars and Deceit and Other Possibilities

"A suspenseful and unflinching novel, The Last Story of Mina Lee had me glued to the page until its surprising and poignant end.” —Amy Meyerson, bestselling author of The Bookshop of Yesterdays and The Imperfects

“Nancy Jooyoun Kim’s The Last Story of Mina Lee reckons with the historical trauma of Korean women and the women of the Korean diaspora. Kim negotiates the boundaries of language, geography, and identity, creating a work that is dynamic and piercing. She uses the language inherited by a deep collective sorrow, or han, and makes possible an understanding between mothers and daughters that have crossed the transpacific divide, together and yet alone. Kim confronts the meaning of “one life in the wreckage” of Korean women’s bodies. The Last Story of Mina Lee is a glimpse of the Korean American presence, from Seoul to Los Angeles, critical to American history and literature.” —E.  J. Koh, author of The Magical Language of Others and A Lesser Love -

Born and raised in Los Angeles, Nancy Jooyoun Kim is a graduate of UCLA and the University of Washington, Seattle. Her essays and short fiction have appeared in the Los Angeles Review of Books, Guernica, NPR/PRI’s Selected Shorts, The Rumpus, Electric Literature, Asian American Writers’ Workshop’s The Margins, The Offing, and elsewhere. The Last Story of Mina Lee is her first novel.

Other Works by Nancy Jooyoun Kim