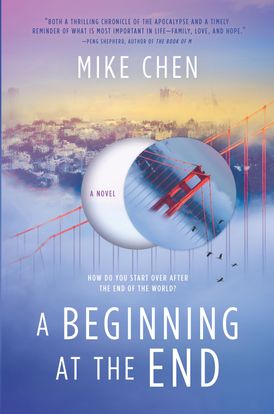 Four survivors come together as the country rebuilds in the aftermath of a devastating pandemic. A character-driven postapocalyptic suspense with an intimate, hopeful look at how people can move forward by creating something better.

Six years after a virus wiped out most of the planet’s population, former pop star Moira is living under a new identity to escape her past—until her domineering father launches a sweeping public search to track her down. Desperate for a fresh start herself, jaded event planner Krista navigates the world for those still too traumatized to go outside, but she never reaches out on her own behalf. Rob has tried to protect his daughter, Sunny, by keeping a heartbreaking secret, but when strict government rules threaten to separate parent and child, Rob needs to prove himself worthy in the city’s eyes by connecting with people again.

Krista, Moira, Rob and Sunny meet by circumstance and their lives begin to twine together. When reports of another outbreak throw the fragile society into panic, the friends are forced to finally face everything that came before—and everything they still stand to lose. Because sometimes having one person is enough to keep the world going.

Praise for A Beginning at the End

"While some readers might worry that picking up a book about a post-pandemic America in the midst of the current COVID-19 crises would feel too relatable, and perhaps even disturbing, the beauty of Chen’s novel is that it doesn’t dwell in the darkness. Though it’s set in the wake of enormous tragedy, it’s ultimately a story about hope, resilience and family—both the one you’re born into and the one you choose for yourself.... An exciting and dramatic tale...that shows the enduring power of hope and community amidst a crisis." —BookTrib on A Beginning at the End


“This postapocalyptic slice-of-life novel…delivers big emotions by keeping the focus small…. By foregrounding family, Chen manages to imbue his apocalypse with heart, hope, and humanity. Sci-fi fans will delight in this lovingly rendered tale.” –Publisher’s Weekly, starred review, on A Beginning at the End


“A Beginning at the End is the best kind of dystopian novel: one rooted deeply in the hearts of his characters and emphasizing hope and connection over fear. Chen has a true gift for making the biggest of worlds center around the most complex workings of hearts, and his newest is compelling, realistic, and impossible to put down.” —Booklist, starred review

“Sometimes it is not the violent battles of post-apocalyptic stories that pull readers in; it is the emotional connection of humanity finding their way. Chen's prose lights a brilliant, fragile path through the darkness.” —Library Journal, starred review, on A Beginning at the End

“A slice-of-life at the end of the world, tender, character-driven, and gentle—which makes it feel all the more terrifyingly plausible…. profoundly subversive and honest… This book is never bleak. Instead, hope reverberates through every character and plotline.” –Tor.com on A Beginning at the End


“An imaginative premise, likable characters, and an uplifting ending…. A refreshingly nondystopian end-of-the-world story.” —Kirkus on A Beginning at the End

"Human beings are the worst, but they're also the best—and A Beginning at the End is a brilliant story about how the best parts of ourselves won't be stopped by a little something like the apocalypse." —Sam J Miller, Nebula-Award-winning author of Blackfish City

"A Beginning at the End is both an apocalyptic thriller and a timely reminder of what is most important in life—family, love, and hope.” —Peng Shepherd, author of The Book of M


"If you're tired of grim, grueling apocalypses with high body counts and bleak horizons, A Beginning at the End offers an intimate, surprisingly gentle vision of post-disaster humanity, less concerned with how we might survive than with why—and for whom." —Alix E. Harrow, Hugo Award-winning author of The Ten Thousand Doors of January

"With beautifully-drawn characters and an intricately imagined future history, A Beginning at the End tells an intensely human story about people reaching out through trauma and loss and discovering who and what to hold on to after the end of the world. Gripping, poignant, hopeful, and heartfelt." —HG Parry, author of The Unlikely Escape of Uriah Heep

"Strikes the perfect balance of dystopian collapse…and a fresh start for humanity. It's science fiction with heart…you won't be able to put it down." –Meghan Scott Molin, author of The Frame Up, on A Beginning at the End

“[The characters] all grapple with questions of identity and morality, of what it means to be part of a family, of what we’re willing to sacrifice and for whom. This is a story that’s as fun as it is moving…. Mike Chen has richly imagined every detail... A Beginning at the End is truly a special addition to the postapocalyptic genre, and it stands up right alongside heavy hitters like Station Eleven and The Last." –Megan Collins, author of The Winter Sister -

Mike Chen is the New York Times bestselling author of Star Wars: Brotherhood, Here and Now and Then, Light Years From Home, and other novels. He has covered geek culture for sites such as Nerdist, Tor.com, and StarTrek.com, and in a different life, covered the NHL. A member of SFWA, Mike lives in the Bay Area with his wife, daughter, and many rescue animals. Follow him on Twitter and Instagram: @mikechenwriter

Other Works by Mike Chen