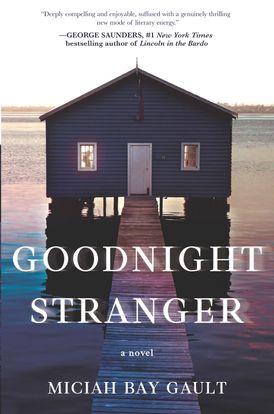 “Somewhere the ghosts of Shirley Jackson and the Henry James of The Turn of the Screw are smiling, because a wildly talented young writer has joined their lineage.”
— George Saunders, #1 New York Times bestselling author of Lincoln in the Bardo

Entertainment Weekly’s New Books to Read in July • Longlisted for the Center for Fiction First Novel Prize • Poets & Writers Annual Debut Fiction Roundup • “One of the best literary thrillers you’ll read this year, I was hooked from page one.” — Cosmopolitan

Lydia and Lucas Moore are in their late twenties when a stranger enters their small world on Wolf Island. Lydia, the responsible sister, has cared for her pathologically shy brother, Lucas, ever since their mom’s death a decade before. They live together, comfortable yet confined, in their family house by the sea, shadowed by events from their childhood.

When Lydia sees the stranger step off the ferry, she feels an immediate connection to him. Lucas is convinced the man, Cole Anthony, is the reincarnation of their baby brother, who died when they were young. Cole knows their mannerisms, their home, the topography of the island—what else could that mean? Though Lydia is doubtful, she can’t deny she is drawn to his magnetism, his energy, and his warmth.

To discover the truth about Cole, Lydia must finally face her anxiety about leaving the island and summon the strength to challenge Cole’s grip on her family’s past and her brother. A deliciously alluring read, Goodnight Stranger is a story of choices and regrets, courage and loneliness, and the ways we hold on to those we love.

"Somewhere the ghosts of Shirley Jackson and the Henry James of The Turn of the Screw are smiling, because a wildly talented young writer has joined their lineage. What a taut, keenly intelligent, and provocative debut

Lincoln in the Bardo

"The emotional reactions of Gault's winning cast of characters lend her ghost story – with its family secrets and unexpected violence – a rare psychological depth." – BBC.com

"Quietly chilling...A suspenseful meditation on the many ways in which the past, consciously or not, shapes the present, the novel flirts with fantasy but ultimately stays grounded in the elemental realities of wind, tides, and the eroding foundations of memory." - Booklist

"One of the best literary thrillers you'll read this year, I was hooked from page one. As in, I started this book and didn't put it down until I had finished. In the interest of not spoiling the plot, all you need to know is that a woman's life is rocked when a man comes to town claiming to be her long-dead brother. Obviously, nothing! Is! As! It! Seems!" –

"Miciah Bay Gault is one of the most naturally talented writers I've ever read, and

Goodnight Stranger is a testament to the capacious scope of her talent. This book has the exceptionally rare quality of being at once lyrical and a page-turner, finely-wrought and hot with speed. I'd say it reminds me of Karen Russell, Donna Tartt, Gillian Flynn and Marilynne Robinson all once, but all it really reminds me of its own remarkable self. This is a monster debut."
- Daniel Torday, acclaimed author of

The Last Flight of Poxl West and

"I couldn't put this book down. Miciah Bay Gault casts a spell with every sentence she writes, and in

Goodnight Stranger, that vivid, mysterious and haunting spell just keeps unfurling. Lydia, her brother, and the island itself pulled me into their web-a land of saltwater, secrets, isolation and desire-and didn't let go, not until long after I'd turned the last page."
- Robin MacArthur, author of

"Miciah Gault has written a perfect novel. It has a story as propulsive as a thriller, characters rich and vivid enough that I will be haunted by them for years, and prose so immaculate that every sentence gleams.

Goodnight Stranger captivated me from its first page to its last. Here is a debut that instantly places its author in the realm of Donna Tartt and Celeste Ng-books you can't put down that are true works of art." - Melissa Febos, author of

Goodnight Stranger is an uncanny, propulsive novel in which even the most stable-seeming ground moves and shifts like water does. I read with my heart in my throat."
– Clare Beams, author of

We Show What We Have Learned

Goodnight Stranger unfolds close to the bone, deep in the gut, right on the edge of every nerve. It seeps into you, takes you over with its dark suspense and its oh so relatable concerns. Bravo to Miciah Bay Gault on a brilliant look at loss, at family, at identity, and at all the many loves we feel." - Robin Black, author of

Miciah Bay Gault grew up on Sanibel Island, Cape Cod, and other beautiful places. A graduate of the Syracuse MFA program, she now teaches in the MFA in Writing & Publishing program at Vermont College of Fine Arts and is the coordinator of the Vermont Book Award. She's the recipient of a Vermont Arts Council Creation Grant, and a fellowship at the Vermont Studio Center. She lives in Montpelier, VT with her husband, three kids, and some backyard chickens.

Other Works by Miciah Bay Gault