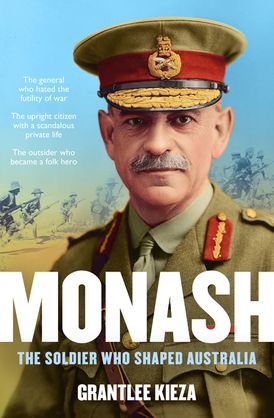 John Monash's life is emblematic of Australia's much heralded egalitarian spirit - here is the ultimate outsider, poor, Jewish in an era which still practiced anti-Semitism, bookish at a time when anti-intellectualism was the order of the day, a restless rebel who struggled to find his feet in career path and in love, but who nevertheless rose to become one of the nation's most enduring folk heroes.

Author Grantlee Kieza tracks Monash's beginnings as the bright son of immigrant rabbis through his years of searching for an identity and his tumultuous love life as a ladies man in Melbourne society before he became one of the city's wealthiest and most succesful citizens. Then, in the frightening blood soaked fields of World War I, he shows how a man who had had never fired a shot in anger grew to become one of the most admired generals Australia has ever produced - while harbouring private thoughts about the futility of war.

'Clear and accessible ... Kieza has made the life of Australia's greatest general open to a broad audience ... well-crafted and extensively documented.' - Stephen Loosley, WEEKEND AUSTRALIAN

'Kieza has added hugely to the depth of knowledge about our greatest military general in a book that is timely and will resonate as interest builds in the work of General Monash.' - Tim Fischer, COURIER MAIL