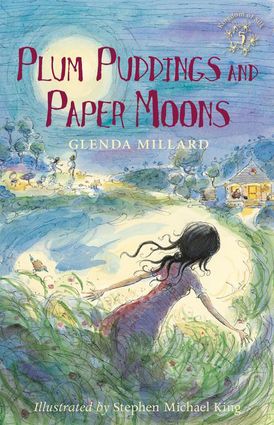 It's almost Christmas in Cameron's Creek and it's a time for wishes, big and small. But Scarlet, the oldest of the Rainbow Girls, is not so sure if wishes can come true. the kitchen at the Kingdom of Silk is warm and sweet with the smell of buttery shortbread and steamed plum puddings. And in the kitchen of the Colour Patch Cafe, Scarlet has made a new friend, Anik. When Anik tells Scarlet about his home far away and of all the things he has lost, Scarlet is determined to make a difference. And so she decides to declare peace on Cameron's Creek, and maybe even the world ... the Naming of tishkin Silk was shortlisted in the NSW Premier's Literary Awards and was a CBCA Honour Book. Layla, Queen of Hearts was shortlisted in the CBCA Awards and won the Queensland Premier's Children's Book Award. Perry Angel's Suitcase was shortlisted in the NSW Premier's Literary Awards and the WA Premier's Literary Awards and won the CBCA Book of the Year Award for Younger Readers. All the Colours of Paradise was shortlisted in the Queensland Premier's Literary Awards, and now, with Plum Puddings and Paper Moons, another chapter in this multi award-winning series is ready to be discovered. Ages 9+ REVIEWS 'this is a book about making new friends, finding out if wishes can come true, and discovering that even a small change is still a step in the right direction. 'Kingdom of Silk' is a wonderful series for young readers who are just discovering the joys of independent reading. It has the power to transport the reader to a land of whimsy and to connect with them on a deeper level. Plum Puddings and Paper Moons will be read and loved by readers who have followed the series from the beginning, and those who have only just discovered it.' BOOKSELLER +PUBLISHER 'What a gem! A Christmas story beyond compare ... Highly recommended.' MAGPIES 'this book about wishes is a wish in itself - a wish for a peaceful world where individuals can make a difference.' tHE AGE

Glenda Millard is a writer of great talent who has the ability to write across all genres and age groups - from picture books to junior fiction to YA novels. Her first novel about the Silk family, The Naming of Tishkin Silk, was published in 2003 by ABC Books. It was shortlisted in the CBC Book of the Year Awards and for the NSW Premier's Literary Awards. She has also had numerous picture books and children's novels published, including, most recently, Duck, Apple, Egg, illustrated by Martina Heiduczek.

Other Works by Glenda Millard

The Tender Moments of Saffron Silk: The Kingdom of Silk Book #6

All the Colours of Paradise

The Naming of Tishkin Silk