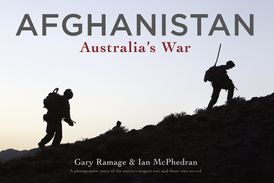 Featuring the stunning images of photographer Gary Ramage, and the words of Ian McPhedran, this book is an emotional, graphic, very moving and comprehensive record of the ten years of Australia's war in Afghanistan.

Australia's War in Afghanistan is an extraordinary visual record which recognizes and celebrates the significant contribution that Australian troops have made to the conflict in Afghanistan over the past ten years. Featuring the stunning images of award-winning photographer Gary Ramage, and the words of best-selling defence writer Ian McPhedran, this book is a stunning, moving and comprehensive record of the war. Over the course of the last ten years, Gary Ramage has travelled extensively with both the United States and the Australian Army in Afghanistan as a civilian and news photographer. Living alongside the soldiers, he has captured images of the battles, the men, and the landscape. His photographs are stunning - powerful, moving, gut-wrenching. they speak of the dirt, blood and the grit of war, of comrades-in-arms, the power of mateship. they also show many unexpected moments of tenderness: a malnourished baby in the arms of a soldier; a child's hand pressed to a window as soldiers march by; a soldier and his dog sleeping together on the ground for warmth. these are the juxtapositions which make his photographs so memorable. He photographs the whole war - not only the battles and their bloody aftermath, but the landscape, the towns, the people, the patrols, the barracks, and the bases. this is Australia's war in Afghanistan.

Ian McPhedran is the award-winning bestselling author of  six books. Until 2016, he was the national defence writer for News Corp Australia and during his extensive career as a journalist he covered conflicts in Burma, Somalia, Cambodia, Papua New Guinea, Indonesia, East Timor, Afghanistan and Iraq. In 1993, he won a United Nations Association peace media award and in 1999 the Walkley award for best news report for his expose of the navy's Collins class submarine fiasco. McPhedran is the author of several bestselling books including The Amazing SAS and Too Bold to Die. His most recent book is The Smack Track (2017). He lives in Balmain with his journalist wife Verona Burgess.

GARY RAMAGE is a triple Walkley Award-winning photographer and video journalist. In 2015 Gary was awarded the Walkley Award for Press Photographer of the Year. Gary is one of Australia's leading news and documentary photojournalists, with more than 24 years experience in the industry and is currently the Chief Photographer for News Corp, covering Australian federal politics as well as national and international news stories of significant importance.

Before becoming a photojournalist, Gary spent 20 years as a military photographer, eventually serving as the Australian Army's Chief Photographer. Gary has documented conflicts all over the world, including Somalia, Bougainville, Bosnia, Kosovo, East Timor, Iraq and Afghanistan. He's also travelled extensively around the world on news assignments.

Other Works by Gary Ramage

Too Bold to Die