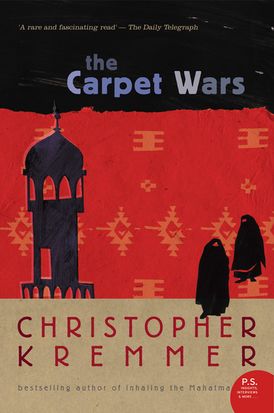 THE CARPET WARS is foreign correspondent Christopher Kremmer's riveting and timely account of a decade spent living, travelling and reporting from Asia and the Middle East.
During his time reporting from Asia and the Middle East he formed an obsession with carpets and the 'perfect rug' - an obsession that saw him trace the threads of the carpet-making trade through the Islamic nations of Pakistan, Afghanistan, Iran, Iraq and the former Soviet republics of Central Asia. Along the way he made lifelong friendships, but he also discovered societies ripped apart by war, religion and fratricide, and ruled over by warlords like 'the Lion of Panjsher' Ahmed Shah Massoud - and terrorist mastermind Osama bin Laden. tHE CARPEt WARS tells the story of Kremmer's amazing journey and his fascinating but fraught experiences in one the most ancient, misunderstood and least-touristed parts of the world.

Christopher Kremmer is one of Australia's most respected and popular writers of narrative non-fiction, whose work has been compared favourably with that of V.S Naipaul and William Dalrymple. Educated at the University of Canberra , he spent a decade in Asia working as a foreign correspondent, producing a series of award-winning bestsellers, including The Carpet Wars, Bamboo Palace and his latest book, Inhaling the Mahatma, a personal history of India. Born in Sydney he divides his time between homes in India and Australia's Southern Highlands."

Other Works by Christopher Kremmer