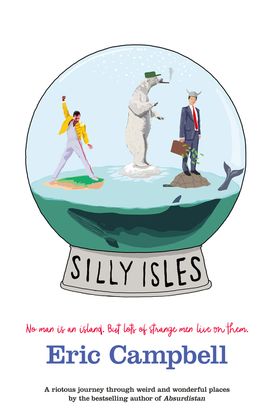 From the bestselling author of Absurdistan, a hilarious tour through small but very strange places.

No man is an island. But lots of strange men live on them.

In the Kurils, off northern Japan, World War II is still being fought between Japan and Russia, both hell-bent on claiming this tiny island group as their territory. The Galapagos Islands may be home to some of the world's most astonishing flora and fauna but it's also home to Ecuador's gerrymander ambitions and has the tear gas, riots and police barricades to prove it. Iceland, the world's 'purest' genetic community, is a place where everyone is blonde, beautiful - and thoroughly in-bred as a result of zero immigration. And in Spitzbergen, residents can choose to live in the neat and tidy, polar-bear hunting Norwegian half or in the mountain of garbage, rust and dysfunction that is the Soviet half.

In more than a decade of international reporting, Eric Campbell has covered wars, famines, presidencies, and revolution. In the islands he surveys here he finds microcosms of society, complete with long-lasting blood feuds, hidden wars, bizarre histories; all the vanities, hopes and rivalries of great powers. Wry, witty and clever, with a wonderful eye for the absurd, Eric Campbell is the Bill Bryson of the small, odd forgotten places around the world and what they tell us about the human condition.

Eric Campbell began his career as a journalist at the Sydney Morning Herald. In 1996 he landed a job as the ABC’s Moscow correspondent and spent the next seven years covering the former Soviet Union, Central Asia, the Balkans and China. He has reported for the 7:30 Report, Lateline and Foreign Correspondent. In 1999 Eric won a New York Television festival award for environmental reporting and was a finalist in the Australian Walkley Awards for his coverage of the war and humanitarian crisis in Kosovo. In 2009 his stories on al-Qaeda in Afghanistan won a Logie for best news coverage.

Other Works by Eric Campbell