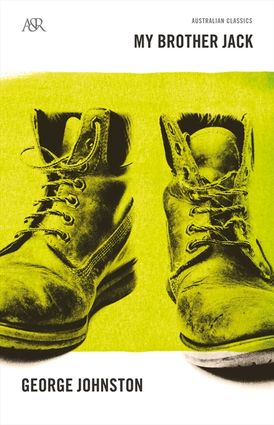 The Miles Franklin award-winning classic. 'One of the greatest books written this century' - The Illustrated London News

'the thing I am trying to get at is what made Jack different from me. Different all through our lives, I mean, and in a special sense, not just older or nobler or braver or less clever.' David and Jack Meredith grow up in a patriotic suburban Melbourne household during the First World War, and go on to lead lives that could not be more different. through the story of the two brothers, George Johnston created an enduring exploration of two Australian myths: that of the man who loses his soul as he gains worldly success, and that of the tough, honest Aussie battler, whose greatest ambition is to serve his country during the war.

Acknowledged as one of the true Australian classics, My Brother Jack is a deeply satisfying, complex and moving literary masterpiece. David Meredith's story continues in the sequels Clean Straw for Nothing and A Cartload of Clay.

George Johnston started his career in journalism with the Melbourne Argus when he was just sixteen. After his work as a correspondent during World War II Johnston began to focus on literature when he moved to the Greek islands with his second wife Charmian Clift. It was the strength of his honesty about humanity and relationships that earned him his place in Australia’s literary canon. Johnston in 1970 after a long battle with tuberculosis, but his enduring myth and greatness lives on through two semi-autobiographical works for which he was awarded the Miles Franklin Award in 1964 for My Brother Jack and in 1969 for Clean Straw for Nothing.

Other Works by George Johnston