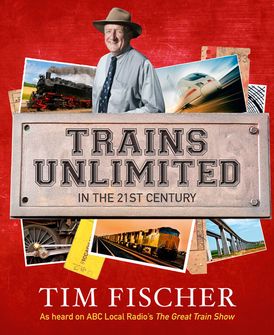 An entertaining and illuminating journey along the world's railways, past, present and future, by the host of the ABC's hugely popular Local Radio series, THE GREAT TRAIN SHOW.
ABC Local Radio's hugely successful podcast series tHE GREAt tRAIN SHOW unearthed thousands of train enthusiasts across the country. Hosted by former deputy PM and renowned train obsessive tim Fischer, the series covered such topics as the restoration of locomotives, childhood train memories, the importance of rail during wartime, and travel on the trans-Siberian railway. tRAINS UNLIMItED continues this entertaining and illuminating journey along the world's railways. It is about the history, excitement and romance of rail, including the twelve best rail experiences in the world, and it explores the future potential of rail - with unequalled energy efficiencies and strong environmental credentials, tim makes a compelling case for an even greater role for rail transport in the 21st century and beyond. As wide-ranging, authoritative, fascinating and quirky as the radio program, tRAINS UNLIMItED is sure to delight all train enthusiasts and interested general readers alike. All aboard!

Tim Fischer's love of trains began when he was a small boy and has become a lifelong passion. As Tim says, he has woven his lifelong study of rail into his various careers, from farmer to army officer, from State politician to Australian Deputy Prime Minister. He retired from Federal Parliament in 2001; in 2009 he became Australia's Amabassador to the Holy See in Rome.

Other Works by Tim Fischer