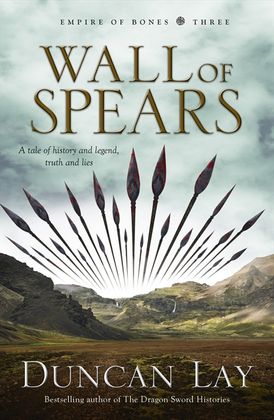 The thrilling conclusion to the Empire of Bones series. It is time to decide who will rule the lands and control the magic. Will it be Forland, with its lust for bloody conquest? Will it be Dokuzen, with its dreams of a slave empire, or will it be Vales, armed only with Rhiannon and her magic - and the truth about why the rulers of Dokuzen claim to be elves? Into this mix comes Sendatsu. Rejected by his true love, hated by his father, hunted by his former best friend, he now burns with the desire to build a better world for his children. Betrayal follows lies which follows more betrayal as the true power behind the vicious struggle is revealed. the fate of all the lands rests on a sword's edge ...

Duncan Lay is the Masthead Chief of THE SUNDAY TELEGRAPH. He has worked for a number of different newspapers and media outlets. He has published the Dragon Sword Histories (WOUNDED GUARDIAN, July 09; RISEN QUEEN, Jan 10; RADIANT CHILD, July 10) and now the Empire of Bones series (BRIDGE OF SWORDS, August 2012). He lives on the Central Coast with his wife and two young children.

Other Works by Duncan Lay