The Woman Who Invented Beauty 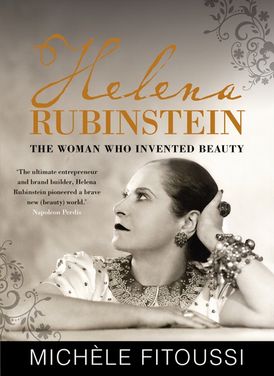 The Woman Who Invented Beauty

The life of a legend well ahead of her time, who brought skin care and cosmetics to Europe and America while building an empire from scratch and reinventing the modern idea of beauty.
Long before SKII, La Prairie, or the coveted Crème de la Mer, there was Helena Rubinstein. Your mother or grandmother probably used Helena Rubinstein creams or cosmetics once upon a time. But not that many people know about Helena's Australian connections. She was little known and has been virtually forgotten, but her extraordinary life spanned nearly a century (she died in 1965 at the age of ninety-three) and three continents. She was banished by her family to Australia at age 24 for refusing to accept an arranged marriage and as a result, became a pioneer who reinvented beauty for modern times. Napoleon Perdis says that he is inspired by Helena. She really was a Polish modern day Scarlett O'Hara! this is the extraordinary story of the woman who created a cosmetic empire and gave it her name, of an entrepreneur who started with nothing except a belief in the strength of women. the eldest of eight girls in a poor Jewish Orthodox family, Helena was born in Krakow, Poland, in 1872. When she was banished to Australia her mother decided to slip a few pots of skin cream, made by a chemist friend of the family, into her daughter's suitcase. Barely two decades later, the cream her mother gave her had become the foundation of her fortune. Coleraine in Victoria, where her uncle was a shopkeeper, might have been an "awful place" but it did not lack for lanolin, the secret ingredient in Helena's creams. to disguise the sheep oil's pungent pong, Helena experimented with lavender, pine bark and water lilies. At the forefront of women's rights movements, Helena opened her first beauty institute in Collins Street, Melbourne in 1902, the year that women obtained the right to vote in Australia. Always ahead of her competitors (Arden, Factor, Revlon, Lauder), she developed marketing and advertising techniques that revolved around skin care and makeup, eventually opening beauty institutes in Australia, London, Paris, and New York. Using science to create cosmetics, she taught women all over the world to do their makeup, to take care of their skin, their bodies, and their well-being. Helena married Edward titus, a Polish-American journalist, editor, and brilliant publicist who helped her establish her empire, with whom she had two sons. She was madly in love; he made her suffer miserably. But he knew everything one needed to know about culture and art in Europe and America. It was through Edward that she was introduced to Cocteau, Colette, D.H. Lawrence, Man Ray. Avant-garde in all domains, she developed an astounding art collection, was a model for Dali, Dufy, Picasso, and owned homes in Europe and the United States. In 1938, she even became a princess, marrying Georgian prince Artchill Gourielli soon after her divorce with Edward titus. She sold her to business to Lehman Brothers in 1928 only to buy it back one year later in the midst of the Depression: making a profit of $6 million, she became one of the wealthiest and most talented businesswomen of her day.

Michèle Fitoussi was born in Tunisia to French parents, and has lived in Paris since the age of five. She has worked for the past twenty-five years at Elle magazine and has interviewed many influential decision makers and world leaders in areas as varied as politics, human sciences, sports, literature and the media.

Other Works by Michele Fitoussi