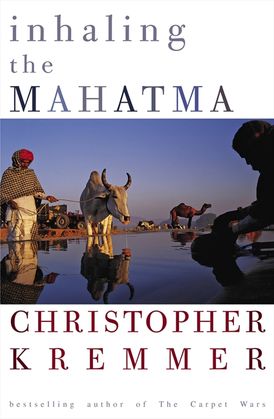 'When a Gandhi dies, nobody is safe.'
'When a Gandhi dies, nobody is safe.' An assassination and a romance. A hijacking, several nuclear explosions and a religious experience ... just some of the ingredients in the latest tour de force from the bestselling author of the Carpet Wars. In the searing summer of 2004, Christopher Kremmer returns to India, a country in the grip of enormous and sometimes violent change. As a young reporter in the 1990s, he first encountered this ancient and complex civilisation. Now, embarking on a yatra, or pilgrimage, he travels the dangerous frontier where religion and politics face off. tracking down the players in a decisive decade, he takes us inside the enigmatic Gandhi dynasty, and introduces an operatic cast of political Brahmins, 'cyber coolies', low-caste messiahs and wrestling priests. A sprawling portrait of India at the crossroads, Inhaling the Mahatma is also an intensely personal story about coming to terms with a dazzlingly different culture, as the author's fate is entwined with a cosmopolitan Hindu family of Old Delhi, and a guru who might just change his life.

Christopher Kremmer is one of Australia's most respected and popular writers of narrative non-fiction, whose work has been compared favourably with that of V.S Naipaul and William Dalrymple. Educated at the University of Canberra , he spent a decade in Asia working as a foreign correspondent, producing a series of award-winning bestsellers, including The Carpet Wars, Bamboo Palace and his latest book, Inhaling the Mahatma, a personal history of India. Born in Sydney he divides his time between homes in India and Australia's Southern Highlands."

Other Works by Christopher Kremmer