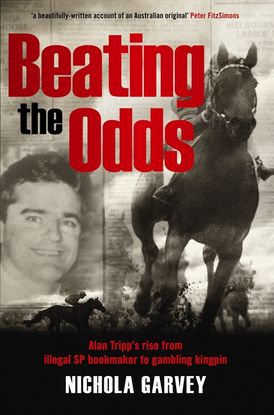 The high-stakes story of Australia's largest private bookmaker
Alan tripp, a man some call a genius and others call a criminal, became the world's most successful private bookmaker. He was Australia's most convicted SP bookmaker and was the prime target of gaming and vice squads around the country in the 1980s. Yet he would eventually sell his businesses for hundreds of millions of dollars. this is his story. Starting-price bookies, although illegal, were long a feature of Australian life, giving punters the opportunity to have a bet away from the track. But with the rise of the tAB, police were ordered to stamp out all other off-course bookmaking in order to protect the state governments' monopoly. Alan tripp, the biggest SP bookie in Australia, was their number-one target. His punting clientele ranged from the high society of Sydney to the underbelly of Melbourne, and included Prime Minister Bob Hawke, media baron Kerry Packer, gangsters Lewis Moran and Alphonse Gangitano, and underworld figure Mick Gatto - as well as many leading trainers and jockeys of the day. tripp's life quickly became a rollercoaster of high-stakes gambling, with the dual threats of bankruptcy and prison never far behind. In a fearless and thrilling narrative, Nichola Garvey recounts the drama and intrigue of the life of Alan tripp, the billion-dollar bookie who beat the odds.

Nichola Garvey is one of Australia’s most exciting up and coming non-fiction authors. She draws inspiration from exceptional yet untold Australian stories, illuminating the tough and gritty character of the nation. Her first book, BEATING THE ODDS, comes after a career in research and a Masters degree in professional writing at UTS. With an uncanny ear for a good story and an ability to get the bit between her teeth she delivers unique narratives with spirit and insight.Nichola is a keen philanthropist dedicating time and resources to worthy causes, particularly young homelessness. Originally from Melbourne she now lives in Sydney

Other Works by Nichola Garvey