In Search Of Kings 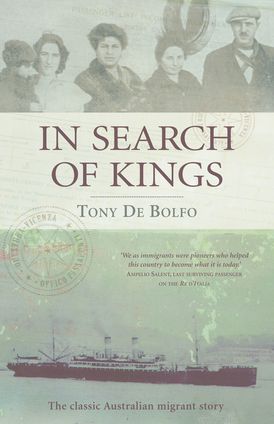 In Search Of Kings


the classic Australian migrant story from acclaimed writer and journalist tony de Bolfo. In 1994, Melbourne journalist tony De Bolfo developed a burning need to discover what prompted his grandfather and two brothers to leave their homeland in northern Italy for a new life in Australia. He turned to his great-uncle Igino De Bolfo, the only surviving member of the original trio who undertook that arduous 46-day voyage aboard the steamship Re d'Italia (King of Italy) 75 years ago. But what began as simple curiosity became an overwhelming obsession for tony, which led him on his own unbelievable voyage of discovery. Working from the original passenger list, he set out to uncover the life stories of the 105 men, women and children who accompanied his forebears down the gangway, into the unknown. tony's search involved regular correspondence, countless phone calls and thousands of kilometres. It took him interstate and overseas and brought him in contact with many descendants, and in some cases the passengers themselves. Many years later after that voyage, tony uncovered extraordinary tales of love and friendship, suicide and murder, tragedy and success. And along the way he has even discovered something about himself.

Writer and journalist Tony De Bolfo is a Carlton man through and through. A long-time sports writer and columnist for the Herald Sun, Tony now writes for a number of publications. His story as told on the ABC's Australian Story in July 1999 was one of the highest rating. Tony's previous book was entitled Sticks: The Stephen Kernahan Story. He lives in Melbourne.

Other Works by Tony De Bolfo