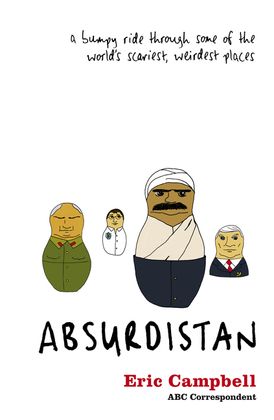 The highs and lows of being a reporter in some of the strangest, most dysfunctional places on Earth.
Award-winning foreign correspondent Eric Campbell has been stoned by fundamentalists, captured by US Special Forces, arrested in Serbia and threatened with expulsion from China. He's negotiated dating rituals in Moscow, shared a house with a charismatic mercenary in Kabul and taken up smoking at gunpoint in Kosovo. In 2003 in Iraq he was injured in a suicide bombing which killed his colleague, cameraman Paul Moran. By turns provocative and thoughtful, ABSURDISTAN is a memoir about juggling life, love and fatherhood while reporting from some of the most dysfunctional places on Earth.

Eric Campbell began his career as a journalist at the Sydney Morning Herald. In 1996 he landed a job as the ABC’s Moscow correspondent and spent the next seven years covering the former Soviet Union, Central Asia, the Balkans and China. He has reported for the 7:30 Report, Lateline and Foreign Correspondent. In 1999 Eric won a New York Television festival award for environmental reporting and was a finalist in the Australian Walkley Awards for his coverage of the war and humanitarian crisis in Kosovo. In 2009 his stories on al-Qaeda in Afghanistan won a Logie for best news coverage.

Other Works by Eric Campbell