What a Ride, Mate 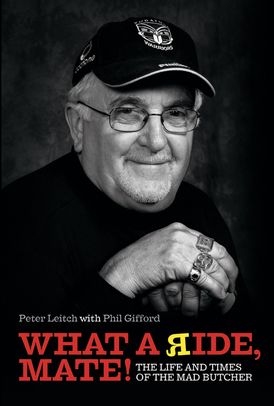 What a Ride, Mate

Peter Leitch, aka the mad Butcher, is a legend in his own lifetime - a larger than life character who left school at 15 and went on to build a nationwide chain of successful butchers shops and a reputation as a foul mouthed league supporter with a heart of gold. Behind the scenes he contributed time, money, energy and his heart and soul to countless charities and good causes, while in public he championed rugby league and his beloved Kiwis and Warriors through thick and thin. For the first time, he has allowed close friend Phil Gifford to write about what his friends have always known, the story of the private family man and grandfather who has embodied the Kiwi dream. In an era of corporate highfliers, business degrees and the old boys network, the working class boy from the Hutt Valley succeeded with hard work, a handshake and a belief that a man's word was his bond. In a revealing glimpse into the private world of the Mad Butcher, Gifford reveals just what makes the Butcher tick and made him the King of the Sausage Sizzle and everybody's mate.

Phil Gifford is an award-winning broadcaster, sports journalist, speaker and author. Creator of satirical rugby character Loosehead Len, Phil has hosted No. 1 radio shows and won 14 radio awards over three decades in New Zealand and Australia, and is the author of 17 bestselling sports books.

Other Works by Peter Leitch