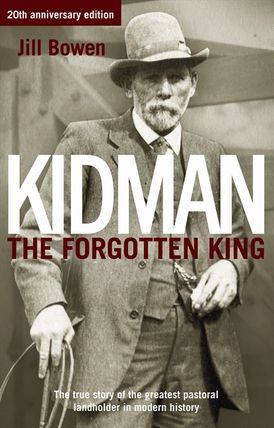 
the true story of the greatest pastoral landholder in modern history As a barely literate youth of thirteen, Sidney Kidman ran away from home and worked as an odd-job boy in a grog shanty in outback Australia. He went on to become the greatest pastoral landholder in modern history, acquiring a legendary reputation both at home and abroad as the Cattle King. Kidman was much more than a grazier. In addition to his many successful business ventures and his contributions to the war effort, he was driven by a grand plan for the remote arid areas of Australia. this kept him locked in a battle with the land - and against drought. Wealth, power, fame and honours did not change Sidney Kidman. He remained the homespun, gregarious bushman for whom men worked with an almost savage loyalty. Greatly admired, he also had many enemies, and in his later years was dogged by controversies and untruths. this book explores the fascinating Kidman legend, and gives a balanced, thoroughly entertaining account of this larger-than-life Australian and his exceptional achievements. 'An addictive read, embracing the romance of the bush and the hardship of the outback.' SUNDAY tIMES

Jill Bowen is a well known Sydney journalist who has written for major Australian newspapers and magazines for over twenty years. This is her first book. Since 1978 she has worked, in her spare time, for the Australian Stockman's Hall of Fame, and in 1980 was appointed to its national board of directors.

Other Works by Jill Bowen