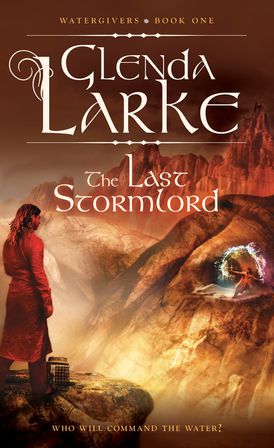 'one of the very best Australian writers of fantasy fiction' NEXUS An absorbing new series about the most precious commodity of all -- water -- from the much-loved author of ISLES OF GLORY
terelle, on the run from indentured servitude in a snuggery, finds refuge with a strange old man who paints pictures on water. She is horrified to discover that his floating artworks can fix the future for those portrayed in them. the Cloudmaster and his stormlords keep the land alive with their power over water and rain, but the current Cloudmaster is dying and there is no one to take his place. Meanwhile, the nomadic desert tribes are being brought together under a charismatic leader. Resenting the control of the stormlords, they plan a return to a time of random rain ...

I am in awe of the sheer virtuosity with which Larke has created her world. Water, or rather the scarcity of water, is the basis of government, economy, social hierarchy and even religion. The Stormlord ability, which can pull water from the sea, and send it where needed, is a hereditary gift. There is a conspiracy to kill off those with degrees of this ability, to return to human warfare and the vagaries of climate. The main protagonist, Slate, lives in an impoverished slum, but has latent water power, and this leads to his kidnapping, and attempts to murder him, as the last living Stormlord’s powers weaken and there is no-one to replace him. The love interest comes from Slate’s relationship with Terelle, who has the ability to alter the future by her paintings, but the powers-that-be need Slate to breed with someone with water talent. Warlike Reduners seek to overpower the other settlements, when growing water shortages lead to the threat of anarchy. One of their weapons is a dreadful insect called a zigger, which attacks by entering orifices and eating the victim from the inside. What a tale! Can’t wait for the next instalment. This is a GREAT book. I was so sad when I finished it; luckily it's going to be a trilogy. AND, she's Australian. -

Glenda Larke was born in Western Australia. She trained as a teacher and taught English in Australia, Vienna, Tunisia and Malaysia. She now combines her passion for writing fantasy with an equal passion for birdwatching and rainforest conservation. Glenda has two children and lives in Kuala Lumpur, Malaysia, with her husband.

Other Works by Glenda Larke

Heart Of The Mirage

Song Of The Shiver Barrens