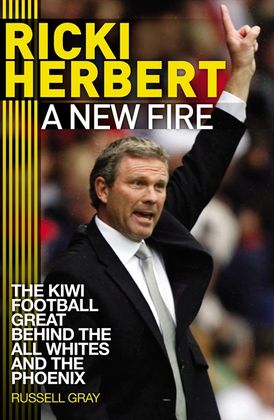 Every Kiwi football fan knows Ricki Herbert.
A star of the 1982 World Cup-qualifying All Whites, Ricki Herbert played football professionally in the United Kingdom for Wolverhampton Wanderers. At the end of a successful career, Ricki took his considerable skills into coaching the game he has loved with a passion all his life. Over the 2006-07 season, the struggles and misadventures of local franchise the Knights became headline news. In danger of losing their place in the competition and facing an ignominious last place, Herbert, by now coach of the All Whites, was called in to see them through the last five games of the season. He achieved what many thought was impossible by winning three of those matches and drawing another, regaining some credibility for New Zealand football in the process. When terry Serepisos formed the Wellington Phoenix from the ashes of the Knights, no-one was surprised that he wanted Herbert as coach. In a revealing and very readable account of the trials and tribulations of a life spent playing and coaching football from New Zealand, Ricki Herbert: A new fire is one for the Yellow Fever Phoenix fans and general sports readers alike.

Russell Gray is a man of many talents - biographer of golfer Michael Campbell, netballer Irene van Dyk, and national golf coach Mal Tongue, he is currently Gear Steward for the Wellington Phoenix football franchise. A retired sports journalist, Russell lives with his wife Barbara in Wainuiomata.

Other Works by Russell Gray